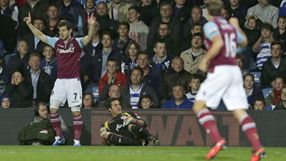 Jarvis's first goal for West Ham, a neatly-taken header past the despairing dive of former Inter Milan and Champions League-winning goalkeeper Julio Cesar, stunned the home side who are still winless and with just two points from six games.

Vaz Te made it 2-0 with a crafty volley at the far post after a corner was scrambled away by QPR who rallied in the second half courtesy of an unstoppable looping shot by Adel Taarabt on 57 minutes.

Their charge was halted by the sending-off of substitute Samba Diakite 15 minutes from time following two swift yellow cards and West Ham moved to 11 points, five behind leaders Chelsea and level with Tottenham Hotspur and West Bromwich Albion.

"The sending-off helped us but overall we deserved it," Hammers captain Kevin Nolan told Sky Sports.

"You see with the quality we had on the bench tonight we're looking to do more than just stay in the Premier League," added the midfielder.

Another recruit, former Finland and Bolton Wanderers goalkeeper Jussi Jaaskelainen, also had a match to remember and produced a string of important saves to keep the desperate hosts out.

QPR manager Mark Hughes was upset at his side's performance despite the improved second-half showing.

"We were very poor and nowhere near the positive results you need to stay in the Premier League. It wasn't what we required tonight," said Hughes.

"The sending-off completely killed our momentum. It was a bit harsh on Samba. He seems to get penalised fairly readily but it's something he needs to work on."