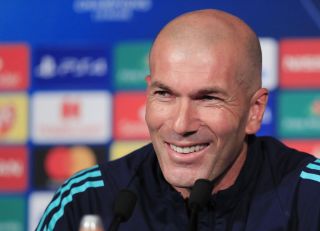 Zinedine Zidane has called on his Real Madrid players to reproduce the desire and commitment that saw them beat Sevilla last time out when they face Osasuna at the Bernabeu on Wednesday.

After a 3-0 defeat to Paris St Germain last week, Real bounced back at the weekend with a 1-0 win over in-form Sevilla to move to second in the league after five matches.

The 47-year-old said he wanted his side to build on their performance from that narrow victory.

“I think the key was that we played as a team from start to finish,” Zidane told a press conference reported by the club website.

“That’s what we need to win games. There’s no such thing as an easy game, so we need to make sure the players stick together. We must keep going in this way.”

Osasuna are currently unbeaten in the league this season, and managed to secure a 2-2 draw against Barcelona on August 31.

On the upcoming game, the Frenchman added: “We’ve got a match tomorrow, that’s the most important thing.

“The players have to focus on that match (against Osasuna) and all I’m concerned by, and the same goes for the players, are the three points up for grabs.

“We need to put on a great performance, with the same intensity, desire and attitude.

“The key thing is to always give it our all on the pitch. My players are the best and they do that.”

When asked about the table, he said: “Anything can happen in this league because it has always been an incredibly tight-fought competition.

“The Spanish league is fantastic and seeing all these teams in such good form means you have to give your best in every game.”

Zidane will be without Ferland Mendy, after the left back was diagnosed with an abductor muscle injury.

Osasuna coach Jagoba Arrasate wants his side to draw confidence from their unbeaten start to the season for the trip to the Bernabeu.

Arrasate said at a press conference reported by the club website: “I would like to see the Osasuna of the last weeks, knowing that is it complicated, that we face a great rival in a difficult scenario, but to see if we are able to maintain that form tomorrow.

“The fact of going undefeated gives us the confidence of knowing that if we do things well, we will be in the game.

“So, we have to accumulate points and you never know where the points are going to be. In that sense, tomorrow is an opportunity, knowing that in theory it is one of the most complicated games we gave.”