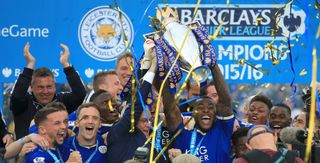 Liverpool completed a remarkable comeback to beat Barcelona 4-0 at Anfield on Tuesday night and book their place in the 2019 Champions League final.

The match was hailed as the ‘Miracle on Merseyside’ as the Reds overcame a 3-0 first-leg deficit to leave the Spanish giants in disbelief.

Here, Press Association Sport takes a look back at some other memorable sporting moments which have come through against all the odds.

The Reds have done this sort of thing before. Liverpool trailed AC Milan 3-0 at half-time in Istanbul, but hit back with goals from Steven Gerrard, Vladimir Smicer and Xabi Alonso in a whirlwind six-minute spell early in the second half. Rafael Benitez’s men clung on to survive a draining extra-time before grabbing the glory in a penalty shoot-out after Jerzy Dudek made two saves.

The ‘Miracle of Medinah’

Europe, led by Spaniard Jose Maria Olazabal, recovered from a 10-4 deficit to win the 2012 Ryder Cup in a pulsating match-up at Medinah. The comeback began with two crucial fourball victories on Saturday afternoon, with Ian Poulter at his inspirational best. The momentum continued into the final day singles with the United States failing to find the four points they needed for victory. Martin Kaymer sank the putt which guaranteed the trophy before a Tiger Woods bogey ensured Europe won outright 14.5-13.5.

At the start of the 2015/2016 season, the odds on Leicester winning the Premier League title were 5,000-1 – longer than those offered on Elvis Presley being found alive and well or for Simon Cowell to become Prime Minister. However, as defending champions Chelsea faltered, along with Manchester City, Tottenham and Arsenal, Claudio Ranieri’s well-drilled side – led by the likes of N’Golo Kante, Riyad Mahrez and Jamie Vardy, helped deliver the most unlikely of sporting triumphs against a backdrop of football’s big spenders.

Woods rolls back the years at Augusta

After being written off as he looked to recapture former glories following back problems, Tiger Woods produced a brilliant display to secure a fifth Masters title at Augusta – delivering a 15th major 11 years after his last. “My dad was here in 1997, and to have my kids there, it’s come full circle,” he said. “It will be up there with one of the hardest I’ve had to win because of what has transpired in the last couple of years.”

Having been diagnosed with testicular cancer during 1979, jockey Bob Champion was given between six and eight months to live. However, after a new form of chemotherapy treatment, which had severe side-effects, Champion recovered and was able to ride again, taking up the mount on Aldaniti for the 1981 Grand National – and produced one of the most inspired victories at Aintree.

Ali wins ‘Rumble in the Jungle’

On this date in 1974: #MuhammadAli took down the undefeated "Big George" Foreman in The Rumble In The Jungle in Kinshasa, Zaire. #PeoplesChamppic.twitter.com/xHSexr4I2t— Muhammad Ali (@MuhammadAli) October 30, 2018

Ali made a comeback from three years out of the sport for refusing to fight in the Vietnam War, but was beaten by both Joe Frazier and Ken Norton. However, Ali, then aged 32, produced one of the most remarkable feats in sporting history when he regained the world heavyweight title for a third time in 1974 with victory over George Foreman at the ‘Rumble in the Jungle’ – his “rope-a-dope” tactics adding another layer to his legacy.

Great Britain’s Lewis Hamilton delivered his maiden Formula One World Championship title in 2008 by passing Toyota’s Timo Glock on the last corner of the last lap in the final Grand Prix of the year in Brazil. The stunning manoeuvre saw Hamilton – who had needed to finish at least fifth – beat Felipe Massa to the drivers’ crown by a single point.

Ian Botham led a sensational revival of England’s fortunes after being sacked as captain, with his team 1-0 down following the second Test. Having previously struggled for form, the all-rounder smashed an unbeaten 149 not only to save England from almost certain defeat in the third Test at Headingley, but lay the platform for Bob Willis to secure a shock 18-run win by taking eight second-innings wickets. Botham then took five second-innings wickets as Australia collapsed to lose the fourth Test at Edgbaston and hit another century in the fifth Test win at Old Trafford.

With Stanley Matthews outstanding and Stan Mortensen completing a hat-trick, Blackpool recovered from a 3-1 deficit late in the second half to beat Bolton 4-3 in the 1953 FA Cup final at Wembley. The match became known as ‘The Matthews Final’ for the role played by the great England winger, who set up two goals including Bill Perry’s injury-time winner to win the biggest prize of his career.

Arguably the biggest upset in rugby union history, rank outsiders Japan stunned two-time champions South Africa with a dramatic 34-32 victory in the 2015 World Cup at Brighton. Led by Eddie Jones, who would go on to become England head coach, the Cherry Blossoms found themselves 12-10 behind in the Pool B match. However, some 24 points from Ayumu Goromaru hauled Japan back into contention before a last-minute try by Karne Hesketh secured the most remarkable of triumphs.

Dennis Taylor trailed 8-0 to Steve Davis in the 1985 World Snooker Championship final, but fought back to win 18-17 in a nail-biting last-frame decider which went to the last black. It remains one of the most famous occasions at the Crucible – and a TV audience of 18.5million stayed tuned beyond midnight to watch the dramatic climax.

In an astonishing turn of events, Manchester United struck twice during stoppage time to beat Bayern Munich 2-1 in the 1999 Champions League final in Barcelona. United had seemed beaten until Teddy Sheringham scored a late equaliser before greater drama followed as Ole Gunnar Solskjaer pounced for a winner from a corner as Sir Alex Ferguson’s men completed the treble.

Awesome to have been part of the @OracleTeamUSA comeback. Sparing a thought for @EmiratesTeamNZ who were incredibly tough opponents.— Ben Ainslie (@AinslieBen) September 26, 2013

Four-time Olympic gold medallist Sir Ben Ainslie enjoyed one of his greatest triumphs as his Team Oracle USA recovered from 8-1 down to win sport’s oldest international trophy in 2013.

At just 17, German Boris Becker pulled off one of the most unlikely sporting triumphs when he won the men’s singles title at Wimbledon in 1985. Having claimed the warm-up event at Queen’s, the energetic Becker defeated Henri Leconte in the quarter-finals and then Swede Anders Jarryd before beating big-serving South African Kevin Curren in four sets to be crowned champion.

The ‘Miracle on Ice’

3️⃣9️⃣years ago today, we beat the mighty Russians!!! It was our 6️⃣th game of the 1980 #LakePlacid Winter @Olympic tournament and we won 4-3! Happy #MiracleonIce Day! 🏒🏅🇺🇸 #miracleonice#80miracleteam#roadtogold#Believepic.twitter.com/K6962lU0n9— 1980 Miracle Team (@1980MiracleTeam) February 22, 2019

The Soviet Union had dominated world ice hockey, but the United States of America team, made up of amateurs, produced a dramatic triumph at Lake Placid on their way to claiming the Winter Olympics gold medal in 1980. The home side, made up of mostly college players, battled bravely to lead 4-3 with 10 minutes left of the third and final period. Despite wave after wave of attacks from the Soviets, the USA held out, sparking wild celebrations as commentator Al Michaels bellowed: “Do you believe in miracles? Yes!” The Americans beat Finland in the final to clinch gold, while the Soviets had to settle for silver after defeating Sweden.