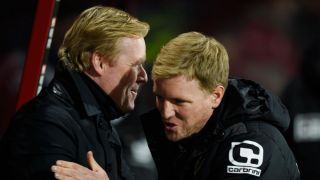 Steve Cook gave the home side the lead after 31 minutes of the south-coast derby at the Vitality Stadium, volleying home after Matt Ritchie's free-kick had initially been saved by visiting goalkeeper Fraser Forster.

Bournemouth then wrapped up the three points when Benik Afobe headed home his fourth goal for the club with 11 minutes remaining.

The result takes Howe's side - who had been stuck on a five-match winless run in all competitions - eight points clear of the relegation zone, although they remain in 15th place in the table.

"I'm very pleased with the players, especially in the first half," he told BBC Radio Solent.

"I thought it was a really good display [in the first half]. We gave them a lot of problems. The speed of our attacking play, the speed of our passing and our intent, were all very good.

"The crowd played their part. They really got behind us and we scored goals at really key times, which we haven't always done this season. It's a huge fixture for them, we recognised that and we really wanted to perform.

"We need to win at home, so this is a big result."

Howe was particularly pleased to keep a second successive clean sheet, with the victory following on from a 0-0 draw at Watford on Saturday.

"Physically, they [Southampton] are very good," he added.

"We suffered at their place with their physicality, but today we stood up very well. We protected our goal well.

"The defensive side of our game is always going to be questioned. With our style of play, questions will be asked.

"But we believe in the defenders we have here. We work hard on our defensive work, and it's really nice to see it rewarded with a clean sheet off the back of the Watford game."