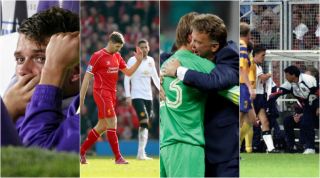 In 2012, Fiorentina sacked manager Delio Rossi for throwing punches at Adem Ljajic - his own player - after the ex-Manchester United trialist sarcastically applauded the decision to rope him off against Novara.

"I've made a mistake and I will pay for it," Rossi said afterwards. "My gesture was ugly, disgraceful and I am very saddened. I have never allowed myself to hit anyone, not even my children."

The authorities weren't swayed by the “emotional tension generated by the delicate situation of the team”, so Rossi was banned for three months following the incident. The liberated Viola secured Serie A safety without him, beating Lecce the very next week.

First Division giantkillers Tranmere added Sunderland to their list of scalps in the fourth round of the FA Cup in 2000, having previously overcome West Ham, Middlesbrough and Coventry in domestic knockout football.

There was more than a hint of controversy to their victory over the Black Cats, though: defender Clint Hill was red-carded in injury time, only to be replaced by Stephen Frail seconds later.

Hill gets sent off, Frail comes on anyway

Fed up of receiving criticism from loudmouth West Ham fan Steve Davies during a pre-season friendly against Oxford City, Hammers boss Harry Redknapp decided to send the supporter - who claimed he could do a better job than his side's striker Lee Chapman - on as a substitute in the second half.

Davies took to the pitch just minutes after sucking on a cigarette and swigging from a bottle in the away end. His Roy of the Rovers moment duly arrived in the 71st minute, the courier from Milton Keynes belting the ball past the veteran Oxford keeper.

"It was like time stopped still - it was the greatest moment of my life," Davies said afterwards. Even 'Arry admitted he was better than Chapman on the night.

Gary Lineker was just two away from a half-century of international goals, and one behind the legendary Bobby Charlton, when Graham Taylor substituted him for Alan Smith with 30 minutes still remaining in this pivotal European Championship tie. Lineker never played for the Three Lions again.

"I took a lot of stick over that but I will maintain, until the day I die, that was a purely footballing decision," Taylor insisted. Lineker was apoplectic at the time but mellowed when he saw the fallout: “He probably did me a favour by making me a martyr. We were a pretty crappy team, probably England’s worst of recent times," he said last year, before watching Roy Hodgson's rabble lose to a nation the size of Coventry with a part-time dentist as its manager.

5. Psycho makes a mug out of Macken, Manchester City vs Middlesbrough 2005

This final-day encounter was essentially a play-off for the final UEFA Cup spot, with Manchester City needing to win and Boro able to draw to secure qualification. The scores were level at 1-1 when Stuart Pearce sent City keeper David James up front in the closing minutes as his side searched for a goal, with midfielder Claudio Reyna taken off for substitute shot-stopper Nicky Weaver.

It was all quite embarrassing for Jon Macken, the striker who was left on the bench as James bumbled around up top. The wacky idea did help win City a penalty in injury time, though, but Mark Schwarzer saved from Robbie Fowler to earn Boro their place in Europe.

When his Dutch team hammered Spain 5-1 at the World Cup in Brazil, Manchester United fans must have been pining for new boss Louis Van Gaal. How time flies...

The Netherlands had to rely on penalties to beat Costa Rica in the quarter-finals, with Van Gaal creating a major talking point by replacing his goalkeeper Jasper Cillessen in the last minute of extra time. Tim Krul entered the fray and saved two spot-kicks in the shoot-out as the Dutch reached the last four.

Van Gaal wanted to repeat the trick in the semi-final against Argentina but found the rules were against him. "I would have done it again but I'd already used my three substitutions," the 62-year-old sighed.

Cillessen off, Krul on

Bayern Munich were thrashing United 1-0 in the Champions League final when the ageing but effective Lothar Matthaus was withdrawn for Thorsten Fink 10 minutes from time. What happened next was scarcely believable as Teddy Sheringham and Ole Gunnar Solskjaer struck late to steal the Red Devils' second European Cup and leave the Germans stunned.

"If I was Matthaus, I would've played that game until the last drop of my blood," a dejected Sammy Kuffour said. "It was Champions League final... him staying on the field would have changed our game."

8. Reds Czech out of Champions League, Bayer Leverkusen vs Liverpool 2002

Champions League football returned to Anfield in 2001/02 after the previous season’s glorious treble, and Gerard Houllier's men travelled to Bayer Leverkusen with one foot in the semi-finals.

The Reds took a 1-0 lead to Germany and, with 29 minutes remaining, held a 2-1 aggregate lead. Houllier then bafflingly took off holding midfielder Didi Hamann in favour of Vladimir Smicer, a move which helped Leverkusen score twice and set up a last-four tie with Manchester United. Oops.

Almost everything the Special One touched turned to gold in his first season at Chelsea, so it was almost startling when his triple change against Newcastle. The Blues were trailing 1-0 in the last 16 of the FA Cup when the Portuguese span the roulette wheel and made a trio of substitutions at half-time, introducing Damien Duff, Eidur Gudjohnsen and Frank Lampard.

The move backfired: Wayne Bridge was stretchered off soon after the restart, and Duff became a passenger after picking up a knock. Carlo Cudicini was later sent off to conclude a thoroughly miserable afternoon, with William Gallas left limping in the final few minutes. "Sometimes you lose and you're still very proud of the team," Mourinho said afterwards. Or, in this case, half a team.

10. Stevie sees red after being caged by Brendan, Liverpool vs Manchester United 2015

Why Everton's new owner won’t be the usual sugar daddy

Having collected 33 points from a possible 39 in their last 13 Premier League encounters, Liverpool were on the up as they attempted to overhaul Manchester United in the final Champions League slot. Brendan Rodgers controversially opted to leave Steven Gerrard, in his swansong season, on the bench, and Liverpool were subsequently pulled apart as they relied on the featherweight Adam Lallana and Joe Allen to boss the midfield.

Rodgers probably told Gerrard to put his foot in when he was introduced at the break, but the skipper took the instruction too literally: 38 seconds after entering the fray, he was sent off for stamping on Ander Herrera. United won 2-1 to all but end Liverpool's hopes of a top-four finish.