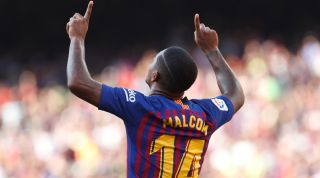 It’s already been quite the season for Frenkie de Jong. The 21-year-old stole the show during his international debut for the Netherlands against France this month, while both Spurs and Barcelona have reportedly had £40m-plus offers for his signature recently turned down. Had Ajax failed to beat Dynamo Kyiv in the Champions League play-off in August, it’s unlikely that the Dutch midfielder would still be sporting red and white colours.

However as Ajax get ready to battle it out with Benfica and AEK Athens for that Group E runners-up spot behind Bayern Munich, the man whose silky skills have lead to comparisons with Luka Modric has decided to stay put and see what his side is capable of. If De Jong continues his early season form, Ajax should be more than capable of progressing to the knockout stage.

One potential superstar Barça did manage to get their hands on this summer was mazy Brazilian forward Malcom, although even that wasn’t exactly straightforward. The 21-year-old was all set to join Roma from Bordeaux, until the Spanish giants muscled in just moments before he was due to board a flight to the Italian capital.

To add insult to injury, Malcom then scored against the Giallorossi in a pre-season friendly. In a side which already boasts Lionel Messi, Philippe Coutinho, Luis Suarez and Ousmane Dembele, it’s unlikely the youngster will start many Champions League games. But Barcelona will no doubt want to prove that all the behind-the-scenes drama was worth it by sending him on as a super sub.

Roma, on the other hand, will be hoping that their earlier (and more successful) young transfer target will make the Malcom disappointment irrelevant. Justin Kluivert, the son of former Barça striker and Champions League winner Patrick, was a pivotal member of the Ajax side that finished runners-up in the Eredivisie last season, scoring 10 goals including his first ever hat-trick.

Although his time in Serie A has been limited to just two substitute appearances so far, the Dutch attacker’s vital assist in August’s 1-0 win over Torino suggests it’s only a matter of time before he breaks through to the first team properly.

Justin Kluivert isn’t the only son of a footballing legend tipped to follow in their father’s footsteps this season. Timothy Weah, the youngest child of the 1994/95 Champions League’s top scorer George, spent most of last season playing for PSG’s second side in the fourth tier of the French game.

However the 18-year-old striker has broken through to the first team this season, netting against both Monaco in the French Super Cup and Caen in a 3-0 Ligue 1 victory. Appearing to have inherited the pace and skill that made his father a PSG favourite, the young striker – already a USA international – may well be a concern for the defences of Group C’s Napoli, Liverpool and Red Star Belgrade.

Like Frenkie de Jong, Goncalo Guedes also reportedly rejected a move to a north London club this summer, choosing Valencia over Arsenal (among many others) as he left PSG in a deal worth €40m. The Portuguese winger isn’t exactly a stranger to the Spaniards, having played 33 Liga games for them on loan in 2017/18, scoring five goals in the process to help them finish fourth.

Yet this season the 21-year-old, who also impressed for his country at the World Cup, will enjoy his first taste of Champions League football in a group which includes Manchester United, Young Boys and Juventus.

The youngest ever player to pick up a Premier League winner’s medal, Phil Foden also played a part in Manchester City’s League Cup win last season and their Community Shield victory at the start of their current campaign. And he’s still only 18.

The versatile English midfielder is unlikely to feature much in the early stages of City’s bid to win that elusive Champions League trophy. But if the Sky Blues qualify for the next round with a game or two to spare – and in a relatively straightforward group including Lyon, Shakhtar Donetsk and newcomers Hoffenheim, that’s a distinct possibility – then the teenager may well get the opportunity to shine on a European stage.

Another graduate of Manchester City’s academy decided to look elsewhere for more playing time in 2017, signing with Borussia Dortmund for approximately £8m. It’s a move which incurred the displeasure of Pep Guardiola, but one which has paid off for the 18-year-old.

Once compared to Neymar by England youth coach Dan Micciche, Jadon Sancho enjoyed 12 appearances for the German side last season, with his strike against Bayer Leverkusen in April 2018 making him the youngest ever Englishman to score in the Bundesliga. With two assists in two games already under his belt in 2018/19, expect the London-born forward to cause Club Brugge, Atletico Madrid and Monaco numerous problems in Group A.

Argentine forward Lautaro Martinez has already proven he can cut it on the continental stage, having netted a hat-trick for Racing Club in their Copa Libertadores win over Brazil’s Cruzeiro earlier this year. He’ll be eager to repeat such a feat in Europe's equivalent competition.

The 21-year-old has already started to show that the €22.7m Inter splashed out for him in the summer was money well spent, scoring a spectacular volley in their International Champions Cup victory over Atletico Madrid. If Martinez can fully recover from a calf injury that has recently kept him out of action, then expect the man lumbered with the unfortunate tag of ‘the new Messi’ to play a key part in his side’s tough group.

After failing to progress through the qualifying rounds in five previous attempts, Young Boys finally made it to the group stages this year with a play-off victory over Dinamo Zagreb. Few would be surprised if the Swiss champions ended up pointless in a group which includes Manchester United, Valencia and Juventus.

However one advantage they do boast is a hugely promising midfielder at their disposal in the shape of Djibril Sow. A target for Arsenal back in April, the 21-year-old was instrumental in bringing the Swiss league title back to the Stade de Suisse for the first time since 1986. Having recently made his international debut in Switzerland’s 6-0 thrashing of Iceland, the pacey playmaker’s confidence will be sky-high.

LIST The 12 best players NEVER to win the Champions League

Striker Martin Terrier joined Lyon way back in January 2018 for €11m from Lille, but has only recently made his debut for the Ligue 1 side following a second lengthy loan spell at Strasbourg.

The 21-year-old has quickly made up for lost time with a handful of impressive performances, scoring a goal against his previous temporary club during Lyon’s recent 2-0 victory at the Parque Olympique Lyonnais.

Forced to play their opening Champions League home game against Manchester City behind closed doors due to last season’s crowd trouble in the Europa League, Lyon will be hoping that the prodigiously skilful Terrier can help switch all the focus back to the action on the pitch.