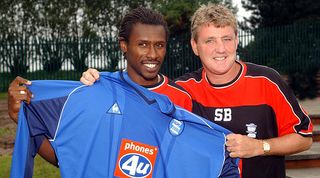 One of the standout stars of Nigeria’s debut World Cup, Amokachi bagged two goals for the Super Eagles at USA ’94, including a wonderful solo effect against Greece.

Everton shelled out a then-club record £3m to bring him to Goodison Park that summer. But despite scoring on his debut against QPR, Amokachi struggled to match his World Cup form.

The Nigerian only managed two full seasons on Merseyside but is still fondly remembered for subbing himself on in an FA Cup semi-final against Tottenham while Paul Rideout was receiving treatment. Amokachi went on to score twice, with Everton manager Joe Royle calling it “the best substitution I never made”.

A virtual unknown outside of Brazil before the 2002 World Cup, Kleberson’s tenacious performance against England in the quarter-finals caught the attention of clubs in the Premier League; Manchester United, Leeds and Newcastle keen on landing the ball-winner.

The Red Devils won the race but were made to wait another year for their man, with Kleberson – 23 in 2002 – refusing to move until his girlfriend turned 16 and they could marry.

He was signed for £6.5m in the summer of 2003 and unveiled alongside a fellow newcomer – one Cristiano Ronaldo. Hampered by injuries and being a bit rubbish, Kleberson left for Besiktas two years later and eventually faded into obscurity. Ronaldo fared a little better.

The Moroccan made a name for himself at France ’98 with a splendid goal against Norway and masterful performance in the 3-0 win over Scotland. Morocco still exited at the group stage, but Hadji had done enough to scoop that year’s African Footballer of the Year award.

He also caught the attention of Gordon Strachan, who put his feelings for Scotland to one side to bring the Moroccan to Coventry in 1999 for £4m.

Teaming up with fellow Moroccan acquisition Youssef Chippo in midfield, Hadji went on to make 62 appearances for the Sky Blues – scoring 12 goals – before relegation in 2001 led to him joining Aston Villa with limited success.

West Ham splashed out £12m on Valencia after he scored three goals for Ecuador at the 2014 World Cup. It turned out the striker had already done some research on his new club, though, having watched Elijah Wood's hooligan flick Green Street for a 100% authentic taste of life in east London.

“I respected the fact that they are very passionate supporters,” Valencia explained, rather diplomatically, to the Guardian. That support wasn’t enough to help Valencia get among the goals regularly, though, despite the Ecuadorian scoring three goals in his first seven league starts – including a 25-yard screamer against Hull on his full debut.

Valencia bagged just 10 in 68 games before moving to Everton briefly on loan. During his time with the Toffees he also made headlines for faking an injury on international duty to evade police, after a warrant was issued for his arrest over unpaid child support.

Dumitrescu reached the pinnacle of his career at USA ’94 with two goals and an assist in Romania’s 3-2 second-round win over Argentina. But it was all downhill from there.

Signed by Tottenham for £2.6m, despite favouring a move to either Italy or Spain, Dumitrescu was almost immediately engulfed in a scandal. After being accused of involvement with a sex worker by the News of the World, the Romanian was loaned out to Sevilla while the furore died down.

Despite later being acquitted of the claim, he was sold on to West Ham before work permit issues led to him becoming a free agent. After a short spell in Mexico he returned home to Steaua Bucharest.

Rojo played an instrumental role in Argentina’s march to the 2014 World Cup Final, featuring six times for the Albiceleste and even popping up with the winner in their 2-1 victory over Bosnia.

Manchester United paid Sporting £16m for the versatile defender’s services, in a deal that saw Nani go the opposite way on loan. “He has ability, physical strength and a willingness to learn,” Louis van Gaal told reporters when the Argentine first arrived. “That means he has a very bright future ahead of him.”

Despite a bright start under the Dutchman, Rojo has since fallen out of favour under Jose Mourinho. Perhaps the winning goal against Nigeria at World Cup 2018 might lead to another post-World Cup switch.

Ivory Coast qualified for the 2006 finals ahead of Cameroon but failed to progress past the group stage after being drawn alongside Argentina, Holland and the now-split Serbia and Montenegro.

Midfield general Zokora still did enough to earn a move away, though, joining Spurs for £8.2m and immediately endearing himself to the White Hart Lane faithful by revealing that he turned down an approach from Arsenal.

“Tottenham are an ambitious club with lots of good young players, and for me they are a club for the future,” he explained. Zokora went on to win the 2008 League Cup during his three years at Spurs – beating Arsenal in the semi-finals.

In his early years at Ajax, Jonk became known as “the man behind Bergkamp” thanks to his uncanny knack for delivering a killer pass to his Dutch counterpart. Their understanding was so good that Inter purchased the pair of them in 1993.

But while Bergkamp would eventually move on to the Premier League with Arsenal in 1995, Jonk had to wait until after the 1998 World Cup for his England move.

By the time he rocked up at Sheffield Wednesday for £2.5m after playing a prominent role in Holland’s march to the semis, some of the magic had gone. Jonk retired from football after two injury-hit seasons in Yorkshire, during which time Wednesday were relegated.

Back in 1994, Romanians were very much in vogue for Tottenham manager Ossie Ardiles. Having already brought compatriot Ilie Dumitrescu off the back of the World Cup, the Spurs manager convinced chairman Alan Sugar to splash out a further £2.9m on fellow World Cup star Gheorghe Popescu from PSV.

Though Popescu lasted longer than both Dumitrescu and Ardiles – the latter was sacked and replaced by Gerry Francis a few weeks later – he left after just a single season at Tottenham. You could hardly blame him; he left to join Barcelona, becoming captain of the Catalan giants in the process.

Yedlin was the breakout star of Jurgen Klinsmann’s experimental USMNT side of 2014, serving as an explosive impact sub in three crucial fixtures for the Americans.

The speedy right-back set up a goal for Clint Dempsey in a crucial 2-2 draw with Portugal in the group phase, and returned to man-mark Eden Hazard out of the game in the second round against Belgium.

Tottenham beat off reported interested from Liverpool and Roma to land the athletic American, but Yedlin rarely got a chance in the first team. The full-back was loaned out to struggling Sunderland and did enough to impress Newcastle, who duly purchased the defender for a bargain £5m in summer 2016.

Sunderland broke their transfer record to sign Gyan for £13m from Rennes in summer 2014, after a World Cup in which the Ghanaian scored three times but fluffed his lines at the crucial moment.

Gyan missed a late penalty for Ghana at the end of their quarter-final clash with Uruguay that would have seen the Black Stars become the first African side to reach the last four of a World Cup.

He enjoyed better luck with the Black Cats, though, scoring 11 Premier League goals in his debut season – including one in a memorable 3-0 win over Chelsea. But he didn’t stick around for long, joining Al-Ain in the Middle East early the following campaign after being offered four times his Sunderland salary.

El Hadji Diouf and Salif Diao dominated the headlines following Senegal’s surprise run to the World Cup quarter-finals but both had agreed to join Liverpool before the tournament.

Instead it was captain and defensive rock Cisse who earned a Premier League move off the back of the tournament, signing for newly-promoted Birmingham. He started with a bang too – but only by getting a red card on his debut against Arsenal.

Though it was rescinded, Cisse’s robust style meant he racked up 10 yellow cards before the New Year. It was a tough time for the midfielder personally: in September 2002 he lost several family members to a ferry disaster off the coast of Gambia.

He remained at Birmingham for another season before moving on to Portsmouth, where he played infrequently. He’s currently managing Senegal at this World Cup.

The marauding full-back who shared his surname with Channel 4 teatime TV favourite Pet Rescue was another Romanian to arrive in the Premier League off the back of USA ‘94, signing for Sheffield Wednesday from Genoa.

Petrescu had starred at the World Cup but was guilty of missing Romania’s crucial spot-kick in their quarter-final defeat to Sweden. He recovered to star for Wednesday, though, earning a move to Chelsea in 1995 – where he won the FA Cup, League Cup and Cup Winners’ Cup over a five-year spell.

During that time, Petrescu also scored the crucial winner when Romania beat England at the 1998 World Cup, leaving Blues team-mate Graeme Le Saux for dead in the process.

The Manchester United stalwart first made his name with an Ecuador side that defied the odds to qualify for the knockout stages of the 2006 World Cup at the expense of Poland and Costa Rica.

A budding winger who had spent the previous season on loan from Villarreal in the Spanish second tier, Valencia ended up on the six-man shortlist for the Best Young Player award at the tournament.

He lost out to Cristiano Ronaldo, despite an attempt by disgruntled England fans to rig the vote, but won admirers on these shores and joined Wigan on the first of two season-long loans. The Latics sealed a bargain £5 million switch in 2008 – before United came calling a season later.

Part of a winning Brazilian midfield combo alongside Kleberson, Gilberto Silva went on to enjoy far more success than his Seleção counterpart and ranks among Arsene Wenger’s best signings.

Adding some much-needed steel to a flashy Brazil team, Silva had Wenger’s attention from the off. Even so, Arsenal had to beat off competition from Aston Villa, issues over unpaid wages at previous club Atletico Mineiro and a work permit problem before they got their man.

He arrived in August 2002 for a mere £4.5m, and went on to become a key component of the Invincibles side that went unbeaten in 2004. Not bad for a holding midfielder who only ended up at the World Cup after Roma’s Emerson was injured on the eve of the finals.

What happened to the youngest teenager of every World Cup from 1958 to 2014?

George Graham signed Schwarz from Benfica after watching him impress with a Sweden side that finished third at the 1994 World Cup. Initially tipped as a playmaker to fill the void left by David Rocastle, in reality Schwarz was more of a water-carrier.

He had his moments, though, most notably in Arsenal’s run to the 1995 European Cup Winners’ Cup Final, where he scored a late free-kick in the semi-final with Sampdoria to force extra time.

Schwarz moved to Italy with Fiorentina after Nayim-powered defeat in that final, though, sticking around in Florence for three years before moving on to Valencia and then Sunderland. His departure from Highbury was significant in paving the way for David Platt’s arrival.