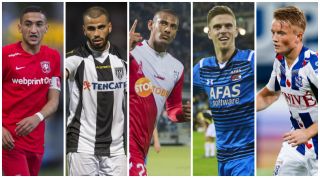 The Eredivisie is witnessing one of its closer title fights in recent years, with Ajax, PSV and Feyenoord all benefiting from a steady stream of talent that has flowed into their respective first teams.

There are plenty of gifted young prospects on the books of various lesser-known sides too, with such players likely to be more attainable for Premier League clubs on the lookout for a bargain in the January window. Here are five breakthrough stars who English sides should have their eye on this month...

At the moment, Twente are like a ship in a whirlpool surrounded by icebergs. Their miserable league performances are compounded by the controversial agreement with investors Doyen, which forced their chairman to resign and got them banned from Europe for three years. Hakim Ziyech has been a rare bright spot on the pitch, though, acting as the club’s version of the valiant band still producing quality music as the Titanic sank.

The 22-year-old is a traditional, inventive playmaker who excels in the No.10 role, where his svelte dribbling and measured passing do most damage. Ziyech is a typical street-style footballer who isn't averse to trying risky passes or daring feints and step-overs; having scored or assisted 34 of Twente’s 43 league goals in 2015, the Moroccan is productive as well as decorative.

The former Heerenveen midfielder should be easy enough to prise away after he publicly lashed out at members of the club’s hierarchy, supporters and his team-mates, while Twente are in no financial position to turn down a concrete offer. Schalke have reportedly been tracking him in recent months, while Southampton may consider Ziyech the perfect replacement for Sadio Mane should the forward join Manchester United.

Heracles have been the surprise package of 2015; this time last year, the club from Almelo were hovering just above the relegation zone, but now they're leaders of the pack behind the traditional big three.

Oussama Tannane has been one of their stars, marauding down the right wing and cutting in on his left foot, as seen in his beautiful goal from the edge of the box against Utrecht. The 21-year-old winger is just as comfortable crossing into the box with his right foot, which poses opposition left-backs a major problem since they can neither allow him to move infield nor push him down the flank.

Tannane has been attracting interest from Turkey, France and Italy, but with just six months left on his contract, Premier League clubs could soon enter the race.

Haller hasn’t looked back since he first arrived in Utrecht just over a year ago, having netted 25 goals since his initial loan move from Auxerre in December 2014. After scoring 11 times last term – a tally that earned him the club’s player of the season crown – Haller signed for Utrecht on a permanent deal last summer for a bargain sum of €750,000.

At 6ft 2in tall, Haller possesses a Thierry Henry-esque build – elegant and sturdy, neither too lightweight nor too stocky. He’s quick too, and is constantly found moving across the forward line in anticipation of a through-ball from his partner-in-crime Nacer Barazite.

Utrecht found it tough enough landing him ahead of Brentford, Sunderland and Aston Villa in the summer, but given that Haller has improved further since then, it could be tough for the Dutch side to persuade him to stay put for too much longer. As far as young French strikers are concerned, one hopes Haller goes on to follow Anthony Martial's rather than Yaya Sanogo’s trail. Southampton, Norwich and Celtic are all said to be keen too.

Henriksen may look like a member of a teenage boyband, but the 23-year-old is more experienced than many of his peers having already notched up almost 250 club appearances and 24 caps for Norway. AZ Alkmaar required a leader after losing lynchpins Aron Johannsson, Steven Berghuis and Nemanja Gudelj in the summer, and Henriksen has stepped up magnificently this term.

Having underperformed in his first three seasons in the Netherlands, the midfielder has clicked into top gear this time around. He’s developed the art of arriving into the box at just the right moment, while his decisive passing is a key part of AZ’s counter-attacks.

After failing to land Ajax’s Davy Klaasen, Napoli have turned their attention to Henriksen, who certainly doesn’t lack the ambition to move to one of Europe's top clubs.

Since signing for the Frisian club back in 2014, Larsson has made himself very much at home in the Netherlands. Affectionately referred to as ‘Samba Sam Larsson' by the fans, the Swede has earned that tag with some sensational street-inspired moves on field. An inverted winger by definition, Larsson is of the same mould as most modern playmakers now who drift across the front with great fluidity.

However, he isn't all show and creates a great deal of chances for his team-mates too. He's comparable to Eden Hazard in this regard; his chance and space creation aren't always reflected in his goals and assists statistics but he tops the charts (along with his Heerenveen predecessor Ziyech) for key passes, with 45 already this term. Larsson also has the most number of successful take-ons this term, with 38, which validates his billing as a progressive attacker.

Larsson has already captured the attentions of Borussia Dortmund, as well as the bigger Eredivisie clubs. A step up to Ajax or PSV might seem more natural at this stage but Larsson could take a bigger leap if a convincing offer comes in.