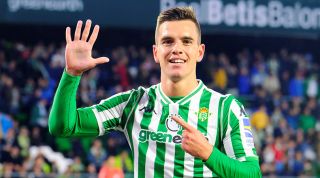 With the transfer window set to close in just over a week, teams across the country are scrambling to make late signings and strengthen their squads ahead of the new season.

The England international is still expected to leave the King Power Stadium before the end of the window, despite a disagreement over the fee up to this point.

Manchester United have reportedly seen a bid of £70 million turned down for the 26-year-old, with the Foxes holding out for closer to £85 million. Maguire wants out but signed a new contract with the club last year – although stories suggest it was agreed that Leicester would let him go if a reasonable bid was received this summer.

It feels like Fulham talisman Sessegnon has been linked with a move to Tottenham since he was in the womb. Now 19, the winger is finally expected to move to north London this summer, with the player keen to work under Mauricio Pochettino.

With one year left on his current contract, an original £50 million valuation has been practically halved. A potential bargain for Spurs.

Praet, 25, has previously been linked with a move to the Premier League via Arsenal; Unai Emery has been reportedly keen on reuniting the Belgian with Lucas Torreira. A move to the Emirates is highly unlikely, however, with the Gunners having signed Real Madrid central midfielder Dani Ceballos.

Instead, Leicester have emerged as admirers of the Belgian and could pay the €26m that Sampdoria want for their 25-year-old playmaker. Brendan Rodgers has admitted his desire to sign an attacking midfielder this summer, and Praet could fit the bill to join his £40m compatriot Youri Tielemans.

The Lazio midfielder is allegedly keen on a move to the Premier League, and Manchester United appear to be front-runners for the 24-year-old Serb. Ole Gunnar Solskjaer is keen to bolster his central midfield, having lost Marouane Fellaini in January and Ander Herrera on a free transfer this summer.

Lazio president Claudio Lotito has admitted that his club are open to selling Milinkovic-Savic, and a fee of between £70 and 90 million would likely be enough to prise him away. With Paul Pogba’s situation yet to be resolved, this one is up in the air.

The Crystal Palace star is a top target for the Toffees, who have allegedly seen two bids rejected for the former Manchester United winger. Arsenal appear to be out of the running, having elected to sign Lille’s Nicolas Pepe instead.

Cenk Tosun and James McCarthy were both included in the players-plus-£55 million deal which was rejected by the London club. Zaha is keen on joining a top-six side before the window closes, but it remains to be seen whether any more bids will arrive for the 26-year-old – especially given that Everton have agreed a £36 million deal for Juventus starlet Moise Kean.

Romelu Lukaku to Juventus… or Inter?

Lukaku was left out of Manchester United’s travelling squad to Oslo as the Red Devils defeated Kristiansand. Solskjaer has confirmed the player needs to work on his fitness – Lukaku hasn’t kicked a ball in pre-season – and has remained at Carrington.

Inter Milan have been chasing the striker all summer but don’t have the funds to meet United’s £80m asking price; now Juventus have emerged as suitors for the 27-year-old and could offer Paulo Dybala in exchange. Either way, it’s difficult to see Lukaku being at Old Trafford by the end of next week.

QUIZ!How many of the 33 Belgian goalscorers in Premier League history can you name?

The Real Betis midfielder has been heavily linked with a move to Tottenham in the last fortnight, but a possible deal has dragged on. Mauricio Pochettino is keen to sign the 21-year-old Argentine, who only made a successful loan spell from PSG permanent at Betis this summer.

Lo Celso appeared to confirm his departure from the Spanish side, having said goodbye to one of his coaches via Instagram. Betis have supposedly dropped their asking price to £45 million, and Pochettino will be hoping Daniel Levy green-lights a deal before next week.

Steve Bruce has seen Newcastle break their transfer record since taking charge, although he had little to do with the signing of Joelinton from Hoffenheim for £40 million. His next recruit could be French winger Saint-Maximin, in a £23m swoop from Nice.

The Magpies have already seen a £14m offer rejected, and the player is unlikely to come cheap given that he still has three years to run on his current contract. Maximin has featured 74 times for Nice since joining from rivals Monaco in 2017, scoring 11 goals.

Everton are keen to secure the signature of Southampton midfielder Lemina following the departure of Idrissa Gueye to Paris Saint-Germain. Manchester United, Arsenal and Leicester were all reportedly keen on the Gabon international, but don't appear to have taken their interest any further.

Lemina, 25, joined Saints in the summer of 2017 but has told the club that he wants to leave. Southampton want £20m for the midfielder who joined them from Juventus for just over £15m in August 2017 – and will likely get their wish.