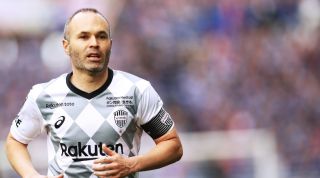 These days, graduates of Barcelona's famed La Masia academy are getting harder to come by.

In the latest issue of FourFourTwo, Andy Mitten assesses just why the talent pool seems to have dried up.

But in the recent past, the school has been a production line for the game's best talent, delivering the backbone of La Liga, Champions League and World Cup-winning sides.

Foremost among them has been Andres Iniesta, scorer of Spain's winning goal in the 2010 World Cup final.

Today, 'the Artist' turns 36 – and here, we take a look back at the La Masia graduate's glittering career.

"Luis Enrique, the captain, introduced me to the first team players. I'm not even sure he knew who I was." It's a big step up for academy prospect Iniesta, as he makes his debut for the first team. A disappointing one in all other regards, however, as the club finish sixth in La Liga, having changed coach twice during the campaign. A poor showing in Europe and the Copa Del Ray adds to the disappointment.

The arrival of Dutch coach Frank Rijkaard heralds a new era at the club, with the signing of Brazilian World Cup winner Ronaldinho laying the groundwork for a new era of success. Barcelona finish second in La Liga, but Iniesta is still a long way from cementing a place in the first team.

Iniesta's breakout year as the club storm to victory in La Liga thanks to plenty of Ronaldinho magic and a 25 goal haul from new signing Samuel Eto'o. Iniesta features in more league games than any other player, though the vast majority of his 37 appearances come as a substitute. A certain Lionel Messi also breaks into the first team.

A long-term injury to fellow La Masia graduate and first teamer Xavi hands Iniesta a first sustained run of starts in the league, as Barcelona retain the title and win the Champions League for the first time since 1992. Initially left on the bench for the final against Arsenal, Iniesta replaces Edmilson at half time to help the team recover from a goal down to win 2-1.

Iniesta inherits the number eight shirt from Ludovic Guily, while his tactical flexibility sees him used in a variety of positions across midfield by manager Frank Rijkaard. This remains his most prolific season in front of goal. It's a poor year on the trophy front, though, with nada won beyond August's curtain raiser.

Despite rumours linking him with a move away from Camp Nou, Iniesta signs a new contract with his boyhood club containing a £125m release clause. It's a fallow year for trophies, however, as the Rijkaard era fades out in unremarkable fashion. Iniesta makes team of the tournament as Spain win EURO 2008.

"He changed everything. Even the goalkeeper became part of the attack." The promotion of Pep Guardiola to first team coach rings through monumental changes at the club. Highly-paid stars such as Ronaldinho and Deco are moved on and a host of academy prospects promoted to the first team. The gamble pays off, as Barcelona win an unprecedented six titles, with Iniesta the side's creator in chief.

A thigh-strain suffered in the previous Champions League final causes Iniesta to miss pre-season. Injuries and fitness issues plague him throughout the campaign, as Barcelona retain the title but fall short in Europe. He recovers in time to help Spain win the World Cup for the first time in the nation's history, scoring the only goal in the final. "It was ugly and there was a lack of respect. Fortunately we won in the end." – Iniesta on Spain's victory over the Netherlands in the final.

Iniesta is at his dazzling best as Barcelona lift a league and Champions League double, defeating Manchester United 3-1 in the final at Wembley. He finishes runner-up in the 2010 Ballon d'Or behind Messi, with Xavi completing an all-Barcelona top three.

Beyond signing a new contract, which will keep him at the club until 2018, it's a largely forgettable year for Barcelona and Iniesta. Despite the hotly-anticipated signing of Neymar, the club finish runners-up in the league and Copa Del Ray, after being dumped out in the last-eight in Europe. The calm before the storm...

Iniesta is made vice-captain of Barcelona before an unforgettable campaign which sees the club secure a league, cup and Champions League treble under new coach Luis Enrique. Iniesta is named man of the match in the final of the latter, as Juventus are brushed aside 3-1 in Berlin.

Following Xavi's departure, Iniesta is named club captain. It's a good year to take the armband, as Barcelona win four titles including the league and Spanish cup. But at the age of 32, the diminutive midfielder is beginning to show signs of slowing down ever so slightly.

Iniesta leads the team to a league and cup double, despite the break-up of 'MSN', with Neymar sold to PSG for a world record fee.

"The dream not only came true, it was better in real life." Iniesta signs a lifetime contract with Barcelona, effectively keeping him at the club for the remainder of his career. Despite this gesture, he soon announces he'll leave the club at the end of the season, after almost 700 matches played. Japanese side Vissel Kobe is his chosen destination. There's still time to lift one last league and cup double before he goes, though.

A three-year agreement is reached between Kobe and their new star signing, who joins Germany World Cup winner Lukas Podolski at the Japanese club. He arrives midway through the campaign, as the club finish in 10th position. "I am still motivated to play football. The stadiums here are impressive," he says of his career in Japan.

Iniesta is named captain of Kobe ahead of the new season. The club goes on to the 2019 Emperor's Cup at the end of his first full campaign.