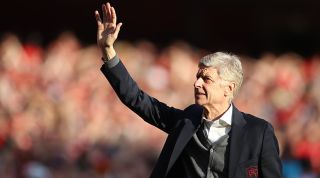 Departing Arsenal manager Arsene Wenger has affirmed his sincere belief that he leaves behind a squad that will struggle to avoid relegation next year.

Wenger, who steps down this summer after 22 years in charge of the north London club, told journalists that the Gunners had performed miracles in beating the drop year on year during his tenure.

"This is a special team, and not in a good way," the French manager told FourFourTwo.

"These players are, without exception, terrible and do not deserve to wear the shirt of this football club, or any football club. They do not deserve clothes. They are stealing a living in the Premier League, and it is a matter of time before they get found out.

"They will do well to finish last next year," he continued. "Our performances over the past two decades, when we somehow escaped relegation time and time again despite having to buy mostly Barcelona youth team players and Ligue 1 journeymen nobody else wanted, are proof of the genius, vision and strategic brilliance of a certain French manager who I will not name.

"I refer to myself, Arsene Wenger," he added.

Wenger said that his legacy would be as the man who kept Arsenal's head above the water while they fought off challenges from better-resourced clubs like Tottenham Hotspur and Burnley.

"Our away form is relegation form, and so is our home form if you take away what I call 'LamagiqueWenger', he said. "The best you can hope for is a title challenge around 10 years from now, in the Evo-Stik Southern League.

Wenger added that he was looking forward to some time away from the game, when he could dedicate more time learning how to put on and take off a jacket.

Please note: This satirical news story is not real. We actually have to say this.