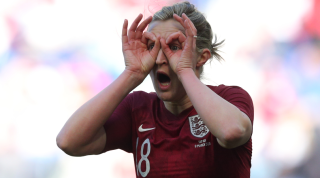 Although some will argue that England’s narrow 1-0 win over Japan in the SheBelieves Cup on Sunday posed more questions than it answered, with the Lionesses limping over the line courtesy of an 84th-minute winner from Ellen White, the influx of fearless young players in Phil Neville’s starting XI almost signals a changing of the guard.

Ellie Roebuck, 20, Lauren Hemp, 19, Chloe Kelly, 22 and Bethany England, 25, – a self-confessed ‘late bloomer’ in the senior England fold having waited longer than most for a senior call up – all landed places into Neville’s line up in New Jersey on Sunday.

Can we start every Monday like this?@ellsbells89pic.twitter.com/HJ8F58bGrm— Lionesses (@Lionesses) March 9, 2020

Even if he did ring in the changes midway through the second half and arguably ‘copped out’ of giving them an opportunity to grind out a result against the 2011 World Cup winners, they didn’t look out of place despite having less than 20 caps between them going to the game at the Red Bull Arena in New Jersey.

Neville – who named a starting XI with an average age of just 21, in a clear signpost to the Euros on home soil next year – probably finds himself in a similar position to the one Gareth Southgate identified after the World Cup in Russia. His youthful new recruits, the likes of Jordan Sancho, Tammy Abraham and Mason Mount, have in turn rejuvenated Southgate’s squad and Neville is eyeing a similar outcome.

“I don’t get my motivation from proving Trump wrong. I don’t care what he thinks” – How Megan Rapinoe conquered the world

The under-fire manager has faced criticism for everything from his ‘non-negotiable’ style of play – and England’s inability to implement it – to team selection and a reluctance to offer a brutally honest critique of his side’s performances.

However, he cannot be criticised for his commitment to giving young players a chance, his unprecedented efforts to get to know them on a personal level and the work he has put in behind the scenes to ease the transition to the senior set up.

Young Roebuck is just one fine example. The Manchester City shot-stopper was invited to train with the SheBelieves Cup squad in USA in March last year, and 12 months on she has earned an opportunity to keep out England’s No. 1 Carly Telford and taken it with both hands.

This time around it’s the turn of Birmingham City goalkeeper Hannah Hampton and Anna Patten, a defender with the University of South Carolina who were both called into Neville’s camp this month as ‘training players’ in a bid to expand the pool he has to pick from as the major home tournament looms. Of course, dips in form and defeats will be an inevitable part of their development and education, and they should be granted the patience needed to succeed.

Still travelling home from the #WomensFACup final so missed most of the Newcastle v Liverpool match.

Arguably for the first time in Neville’s two-year tenure, the senior players are beginning to understand that their places are not guaranteed. Whether Neville is brave enough to leave out a few of the more familiar faces in the tussle between form and reputation is another matter.

Unsurprisingly, England’s lacklustre performances of late and their inconsistent run of results since that fateful night in Lyon that saw them crash out of the 2019 World Cup at the hands of USA in the semi-final stages, it has sometimes proved a struggle to identify the positive impacts of Neville’s reign.

But if he shifts the focus on England becoming the best possible version of themselves, rather than obsessing with closing down the gap on the four-time world champions, we might appreciate the significant strides we’re taking in building a squad fit for 2021.

QUIZCan you name every country from the 2019 Women's World Cup?

GUIDEPremier League live stream best VPN: how to watch every game from anywhere in the world