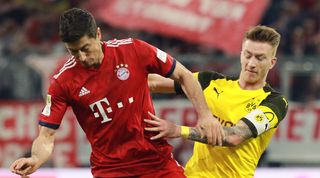 You've got six minutes on the clock to try and name as many of the 56 Bundesliga champions as best as you can.

Let us know how you did @FourFourTwo – and remember to share with your freunds and freundins.

This season is an absolute stonker in the Bundesliga. And it's back this weekend!

Each generation of German football reliably produces a conveyor belt of icons of the games, from Müllers Gerd to Thomas, and from Jurgen Klopp to Julian Nagelsmann.

The Bundesliga, in its current form, has been rolling since 1962. Germany's national defeat to Yugoslavia at the World Cup in Chile was to become a defining moment for the country - just as it was when England smashed them 5-1 in their own backyard and prompted a thorough re-think of German football (glad to have been of help, lads).

Of course, there was the unification of the early 1990s, too. The West merged with the East and in recent years, we've seen the east's newest superpower, RB Leipzig, rocket up the pyramid.

Since the '60s, there have been some familiar names, some hard to spell ones too, but we want you to give it your best stab.