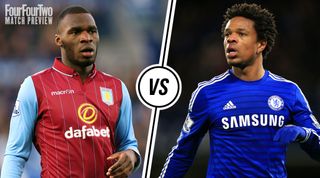 Paul Lambert takes charge of his 100th Premier League as Aston Villa manager this weekend, although some supporters may be scratching their head wondering how he’s made it this far.

Just 97 goals have been scored in 99 league games under his stewardship, with only Alex McLeish (18%) possessing a lower win percentage than Lambert (25%) among permanent Villa bosses.

The West Midlanders are the worst team in the league for goals scored, shots on target, shooting accuracy and chances created, but the indications are that the Scot is going nowhere in a hurry.

Sacking managers is a “false narrative” according to chief executive Tom Fox, who claimed that casting out their coach mid-season would be like “flipping a coin” over their Premier League status, and that the club were “heading in the right direction”. Honest.

Sunday’s 5-0 shellacking at Arsenal could have been timed better, then, with Lambert lamenting his team’s ‘acceptance to lose more goals’ in the second half of the Emirates drubbing.

The hefty hit to the goal difference means Villa are now potentially a defeat away from the drop zone, although having scored just 11 goals all season – nine fewer than anyone else and 42 shy of Chelsea’s tally – it’s to their credit that they’re not already in it.

The 2-1 home defeat to Spurs is the only game the Villans have scored in but lost this season – but where their next goal is coming from is anyone’s guess. After a five-game drought earlier in the campaign, the Lions’ current barren run stands at a club record six league matches and more than 600 minutes.

Still, it only takes a second to score a goal and all that. And one goal was enough to settle this fixture in Villa’s favour last term; Fabian Delph flicking in an 82nd-minute winner as both Willian and Ramires saw red and Chelsea's title aspirations suffered the first of three hefty blows at the business end of the season.

Ramires was also sent off at Villa Park the previous season, as was Christian Benteke, so the Brazilian would be wise not to make it an unlikely hat-trick on one of Jose Mourinho’s bogey grounds.

St James’ Park – where the Blues have lost this season – and Villa Park are the only two venues where Jose has never won a Premier League game, drawing on three visits before a 2-0 defeat in 2007.

Having sat back and stifled Manchester City to keep their five-point lead atop the table intact, the Portuguese will be keen to see his side return to the swashbuckling style that devastated Swansea 5-0 three Saturdays ago.

Since then the Blues haven’t won any of their four outings inside 90 minutes, needing extra-time to reach the League Cup final after being embarrassed by Bradford in the FA Cup.

Villa will hope to have Ron Vlaar (knee) and Joe Cole (hamstring) available again but Philippe Senderos and Libor Kozak remain sidelined. New No.9 Scott Sinclair made his debut off the bench at Arsenal last weekend after signing on loan from Manchester City.

New Blue Juan Cuadrado could be in line for his debut after arriving from Fiorentina, with Mohamed Salah heading in the opposite direction on loan. Andre Schurrle returned to Germany with Wolfsburg on deadline day, while Ryan Bertrand’s move to Southampton was made permanent for £10 million.

Diego Costa serves the second of his three-match ban for allegedly stamping on Liverpool’s Emre Can, with Cesc Fabregas also set to miss two more games with a hamstring problem. John Obi Mikel is expected to be back in contention following a head injury.

Given Villa will probably sit back and look to soak up pressure, Saturday would seem an opportune time to hand the attack-minded Colombian wing wizard his debut.

Chelsea’s new £26.1 million man has already been involved in 8 Fiorentina goals this season – scoring 4 and setting up 4 – and in 17 Serie A starts and five Europa League appearances this campaign he has attempted 93 take-ons, completing 50 of them.

What’s more, Cuadrado also recorded the most assists at the World Cup, teeing up 4 goals in his 5 outings on top of scoring one himself against Japan. The 26-year-old also completed 8/18 take-ons in Brazil, set up 7 chances and made 109/129 passes.

“I’m a quick and positive player and I hope to show that on the field of play and help all of my team-mates,” he told Chelsea TV after penning his four-and-a-half-year contract.

The Special One has been shunning the media spotlight ever since Costa was banned, so it’s been left to others to speak about the Portuguese this week.

Cuadrado identified the chance to play under Mourinho as a key factor in his deadline-day switch to Stamford Bridge, saying: “It is really brilliant to work with one of the best coaches in the world. I'm very proud to be playing for him and I think he is going to help me grow into a better player.”

Meanwhile, Jose’s agent, Jorge Mendes, believes he will remain with the Blues for the next decade, telling the BBC: “He will be the next Sir Alex Ferguson of Chelsea. He loves the supporters, he loves the city.”

Despite having the Villa board’s backing, Lambert is still the bookmakers’ second favourite to be the next Premier League manager ousted from his hotseat – after Hull boss Steve Bruce.

Branislav Ivanovic, with four goals in five starts against Villa, comes up trumps again as Chelsea huff and puff at times but eventually win a league game 1-0 for the first time this season.