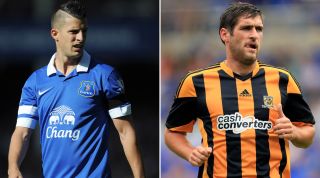 The remaining unbeaten record in the Premier League fell last time out, but few would have expected it to have belonged to Everton at the start of the season. Roberto Martinez’s men led before losing at Manchester City, but Romelu Lukaku will be licking his lips at the prospect of sinking his teeth into Hull.

The Belgium hot shot continues to leave Chelsea fans perplexed at his deadline-day move to Merseyside, with the loanee scoring four goals in his three league appearances. Lukaku then added to his burgeoning reputation by bagging an international brace in Croatia to secure World Cup qualification for his country. Yet the youngster remains focused on improving his game, saying: “I can be better, the road is long. I want to reach my maximum.”

The attack-minded Toffees will be expected to get back to winning ways, but their opponents have proved more than useful on the road in 2013/14. Profligacy in front of goal cost Steve Bruce’s side dear in their defeat at Manchester City, but they found their shooting boots in their manager’s native North East to win 3-2 at Newcastle.

Those three strikes at St James’ Park make up 50% of the Tigers’ league goals this season, having netted a measly three times in their other six outings. But Hull have also been miserly at the opposite end; three successive clean sheets at the KC Stadium preceded the victory at St James’ Park, and in the league they have conceded just seven goals this term, fewer than Arsenal and Man City.

Hull will need such defensive fortitude to continue if they are take anything from what has become ‘Fortress Goodison’, a venue where the Tigers have not triumphed since August 1952. Everton are unbeaten in 12 league games on home soil and had kept seven successive clean sheets prior to their wobble against Newcastle.

Martinez’s midweek trip to Dublin didn’t go to plan as he watched midfielder Darron Gibson suffer cruciate ligament damage, although it is hoped he will be back before the end of the season. Steven Pienaar and Antolin Alcaraz are reported to be ‘on the mend’ but may not be quite ready for a return to action this weekend. Goalkeeper Tim Howard was able to return to domestic duty earlier than expected after being released from the United States squad for Tuesday’s win in Panama.

Hull remain without the injured Robert Koren (foot) and James Chester (hamstring) but top scorer Robbie Brady could feature after recovering from a hernia operation.

Hull’s formula for success last season was defensive solidity and it has stood them in good stead for their step up into the top flight.

The Tigers had the fourth best defensive record in the Championship and have averaged one goal against per game after seven rounds of Premier League action. In six of Hull’s seven league games Curtis Davies has made more successful clearances than any of his Tigers team-mates, and he will need to be as alert as ever to keep one of the division’s in-form marksmen at arm’s length.

When Bruce left Wigan for Sunderland in June 2009 it was Martinez who succeeded him at Dave Whelan’s DW Stadium. As luck would have it, a last-gasp 2-1 Wigan win at the Stadium of Light signalled the end of Bruce’s reign on Wearside in November 2011. Bruce’s only victory in five meetings with Martinez had come just a few months earlier. Ahmed Elmohamady, now a Tiger, was then a Black Cat in a 4-2 win.

Lukaku to continue plundering his way through Premier League defences, but Hull will make it far from a stroll for an Everton side wearier following many of their players' international exploits. 1-0.