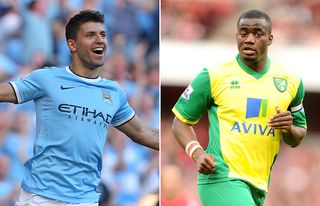 Another avian massacre in Manchester. Canary clean-up on aisle 4.

Norwich fans will be forgiven for dreading a second jaunt to Manchester in five days, having seen their side unceremoniously dumped out of the League Cup.

Fond memories of the Etihad still remain after May's final day five-goal thriller, which was Man City's last home league defeat. But the Blues are not likely to be anywhere near as generous in the wake of their Chelsea catastrophe.

The goals have flowed in this fixture in recent seasons. Twenty five have been notched in the last five meetings alone, featuring 5-1 and 6-1 City strolls in 2011/12. This doesn't bode well for a Norwich outfit who have shipped four in each of their past two trips and are struggling to score themselves.

Of their 15 goals this season, nine of them have come against Watford and Bury. Not that Norwich aren't trying; they've fashioned 57 attempts in the last three league games, including 31 in the stalemate with Cardiff. Gary Hooper, Johan Elmander and Ricky van Wolfswinkel need to start taking some of them if they're going to keep their manager in a job over the coming days, let alone weeks.

City's away travails can be temporarily put to one side, with the home form imperious in the Premier League. The Blues still boast a 100 per cent record at the Etihad Stadium, scoring 13 goals in the process of sending Newcastle, Hull, Man United and Everton packing.

The hosts should be able to maintain that form despite captain Vincent Kompany still being sidelined due to a thigh injury, while in-form Sergio Aguero will be confident of adding to his four goals in three previous starts against Saturday's opponents.

All eyes will be on whether Pellegrini takes Joe Hart out of the firing line following his latest indiscretion at Stamford Bridge, and pushes Romanian custodian Costel Pantilimon into the spotlight.

The 6ft 8in shot-stopper was, conveniently, named man-of-the-match in City's League Cup win at Newcastle, making a crucial late save to deny Papiss Cisse. Pantilimon still awaits his Premier League debut for the Blues having made 13 appearances in cup competitions since arriving from Poli Timisoara in 2011.

Kompany will not be back in action until after the upcoming international break.

Robert Snodgrass suffered concussion and was stretchered off during the midweek League Cup loss at Old Trafford. The Scot spent the night in a Manchester hospital and is likely to miss out with players often advised to rest for up to five days before returning to action. The Canaries are also set to be without Elliott Bennett (knee) but Van Wolfswinkel (ankle) made a brief cameo against Cardiff so should be available to start.

Seemingly little can stop City's pocket dynamo at the moment, with the long-range stunner against Chelsea making it nine goals and two assists in seven appearances for the Argentine.

Norwich will be fearful of facing the diminutive marksman in such devastating form, having been stung by the striker plenty of times in recent seasons. The 25-year-old has notched four goals and an assist in the sides' last four encounters. Keep him quiet, and the Canaries will then only have to contain Silva, Negredo... ah, forget it.

Pellegrini and Hughton face off for the first time. While the Norwich boss will not be expected to take any points back to Carrow Road, supporters will want to see a display that hints at better things to come against West Ham in a week's time. Otherwise it could be curtains for the 54-year-old.

"[The fans] are a fanatical and emotional support and any frustrations they have is because they want to see us win a game," Hughton said after the 0-0 draw with Cardiff. "They are the exact same reactions I would have. I have no problem with their reaction; it shows that they care. It's their football club."

Another routine home victory for the Blues. Yaya Toure adds another direct free-kick to his collection. 4-0.