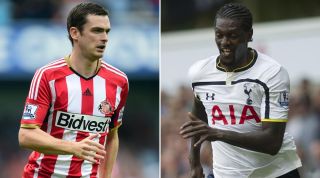 A chance to see Tottenham's lovely yellow away kit (unless they wear the black).

There can be few things more frustrating for a Premier League manager than a disappointing defeat immediately before an international break. No chance to get all your players back onto the training ground to assess what went wrong, no chance to immediately 'bounce back'.

Both Gus Poyet and Mauricio Pochettino will have felt such irritation over the last fortnight. Poyet's Sunderland were beaten 1-0 at QPR last time out, while Pochettino's Spurs suffered a 3-0 home humbling at the hands of Liverpool.

Both clubs have recruited well, but at first glance it would seem neither has done enough to hold too high expectations of leapfrogging more than one of the clubs that finished ahead of them last season. Spurs have an impressive recent record at the Stadium of Light - winning three of their last four visits 2-1, and drew the other 0-0 - and will naturally be aiming to extend that run.

Sunderland, meanwhile, will be hoping for three points to help shed their reputation as slow starters. The Black Cats won just three times in the opening eight matches of the last four seasons (32 matches in total), and are yet to win in the league this season.

Sunderland appear to have a clean bill of health, so Poyet's biggest headache will be wether to persist with the 4-3-3 formation he used in the 1-1 draw with Manchester United and the 1-0 defeat to QPR.

Spurs could give debuts to Stambouli and Argentine defender Federico Fazio, but will still be without long-term absentee Kyle Walker. Eric Dier, Danny Rose and Roberto Soldado will all undergo fitness tests.

Despite another summer of change in N17, Adebayor remains the attacking focal point of the Spurs team. With most of his team-mates yet to discover the knack of scoring regularly in the Premier League, the pressure is on the former Arsenal and Manchester City man to net on a regular basis. This weekend, it'll be down to the vastly experienced Wes(ley) Brown to stop him.

But it's not just a case of what the Togolese does when he has the ball - he'll also be required to press and harrass Brown when the Sunderland defender is in possession. The Black Cats defender completed more passes than any of his team-mates in the recent draw with Manchester United (72).

Pochettino is famed for his high-octaine pressing game, but in 252 league minutes this season, Adebayor has attempted just 2 tackles and made 1 interception. That's not to say he hasn't been putting the hard yards in, but he may need to do more to force Sunderland into mistakes and knock them off their stride.

"It is a massive game against one of my old clubs,” Sunderland boss Poyet told his club's official website, speaking ahead of a meeting with a club he represented as both a player and assistant manager. “[Tottenham] have great players and one of the best squads in the Premier League with plenty of options. They also have a new manager who is a good friend which gives it something special, but it is big game for us and it will be very challenging. We need to make sure we are at our best and control the game as much as we can whilst being clinical in front of goal – I think it will be an exciting game."

Poyet has previously gone toe-to-toe with Pochettino three times as a manager - all last season, when the Argentine was coaching Southampton. The first saw Poyet's Black Cats beat Pochettino's Saints 2-1 in a League Cup fourth round clash, the second saw the two teams share four goals in a 2-2 Premier League draw at the Stadium of Light, and the third saw Poyet's team run out 1-0 winners in the fifth round of the FA Cup.

Both teams to start the game determined to 'bounce back' with a win, but to end it happy not to lose. 1-1.