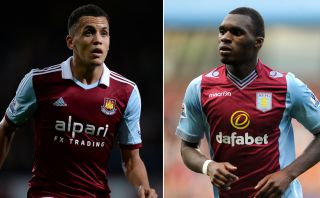 Clash of the downtable clarets, except Villa will be in luminous green.

West Ham can't wait forever for Andy Carroll. If the big Geordie's absence is giving Sam Allardyce lemons, the boss's strikerless formation made lemonade at Spurs but a more acidic brew at home to Manchester City, and something rather flat and tasteless at Swansea. A game at home to the notably possession-light Aston Villa might require a focal-point forward, and it looks like it might be the re-signed Carlton Cole, who came on at the Liberty Stadium.

The Hammers' results so far have been fitting for a side essentially playing a variant of 4-6-0. No Premier League team has drawn more blanks in the nine fixtures so far than their five, but Allardyce's side have also kept five clean sheets – more than any team except Southampton and Spurs, the only two sides whose games have featured fewer goals than West Ham's 16 (eight for, eight against). Although they haven't exactly been parking the bus, Allardyce might decide to dial the attacking up a notch at home to a side that only just escaped relegation last season.

That said, swift counter-attackers Villa are nobody's home banker. Of their last six away games stretching back to the end of the last campaign, they've won three and only lost one - somewhat controversially at Chelsea. This season, they've also got twice as many points on the road as at Villa Park.

Paul Lambert's side are only just above the drop zone. True, so are half the division, but three of 13th-placed Villa's next four opponents are below them and within overtaking distance: this would be a bad time to start distributing points to their rivals. Having not scored since September, they will hope to be boosted by Christian Benteke… the sort of barnstorming striker Allardyce would love to field.

Further narrowing West Ham's attacking options, Ricardo Vaz Te is out after dislocating his shoulder. For Villa, Gabby Agbonlahor aggravated an ankle against Everton and faces a fitness test.

Villa may have beaten Man City without him, but it's possible to argue that not since the days of Matt Le Tissier have a top-flight team relied so much on one player. Against Everton, Villa's target-man received dozens of long balls just inside the visitors' half, but it wasn't his day: having had his early penalty saved by the extravagantly-bearded Tim Howard, he won an unusually low number of aerial duels against the Toffees' back-line. Allardyce will have been making notes for Winston Reid and James Tomkins.

Allardyce was Lambert's first opponent as Aston Villa manager: his new side outpassed their hosts by 452 to 204 but lost 1-0. By February's return game, Lambert had taught his men to make less ball go a longer way, and Villa won 2-1 despite only completing five more passes than their visitors. Last month, they beat Man City 3-2 without even completing 200 passes - fewer than the Hammers racked up in either of their victories this season. Quick learner, that Lambert lad.

West Ham means a nil somewhere, but Villa means it won't be a 0-0 (only Palace have drawn fewer than Villa's one this season). 0-1 (Benteke), whom Big Sam will describe as the difference between the teams.