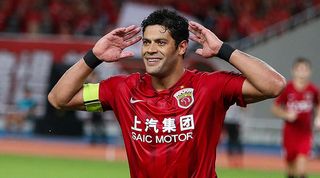 Shanghai SIPG striker Hulk has admitted that Chelsea were once interested in his services – but that he had no idea until after the fact.

The Brazilian, now 33, has spent the last four years in China after a similarly lengthy stint at Zenit Saint Petersburg. Having tasted domestic success in Russia, Hulk celebrated ending Guangzhou Evergrande's monopoly of the Chinese Super League in 2018.

His €60 million move to Zenit in 2012 came as something of a surprise after he had established himself as one of Europe’s hottest properties at Porto – but Hulk says a Premier League switch was never truly forthcoming.

“In my first season at Porto, I started well and remember hearing some talk about Manchester United, but I never received anything concrete on that,” he admits in the July 2020 issue of FFT – a Brazil special out in shops now and available to order online with free delivery.

“At the time, I was too young and left those things for other people to sort out, so I didn’t get to know which offers arrived. Only after I signed for Zenit was I told Chelsea had been interested, but I can’t tell you how serious they were.

“Naturally it felt a bit strange not hearing any news regarding a potential transfer, because you always see players from the Portuguese league going to teams like Barcelona and Real Madrid, and also the Premier League. I’d been the best player in Portugal in three different seasons, too.”

QUIZ! Can you get 60 correct answers in our big six quiz?