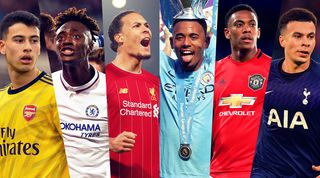 12 minutes on the clock, 60 answers to guess - all you'll have to write for each is Arsenal (A), Chelsea (C), Liverpool (L), Manchester City (MC), Manchester United (MU) or Tottenham Hotspur (T).

We could be coming to the end of an era this season.

For so long, the Premier League was a duopoly in which Manchester United and Arsenal fought it out each season for the title. Between 1996 and 2004, that famous trophy didn't reside anywhere else - until Chelsea came along.

In the late 00s, the Big Four took over, as Liverpool joined to secure that fourth Champions League spot every season. Then later, Manchester City and Tottenham Hotspur made it a top six.

Now, we're at the stage where Leicester City look like they'll get third or fourth - Wolverhampton Wanderers could finish in the top four or five. Sheffield United, too, may also pip Arsenal and Spurs to Europa League football next season. And what about Newcastle United, who may be taken over soon and could shoot up the table?

The era of the Big Six could be over soon. But not just yet - so let's pose 60 questions on the clubs themselves to you...