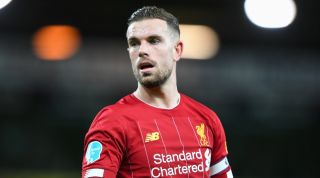 In February, after Liverpool uncharacteristically went behind in a football match against West Ham – before inevitably recording their 18th consecutive league win – team-mates Andy Robertson and Trent Alexander-Arnold both admitted to missing the captain’s influence.

“When you don’t have your captain out there you can feel it,” said Robertson.

“Hendo is a real leader. He was in the changing room before saying a few words and he was exactly the same as he always is before games, and he was in there again afterwards.

“It was good having him there. Everyone hates being on the sidelines and Hendo is no different. The quicker he’s back the better for all of us.

“He’s someone who you probably don’t realise how much he does for the team until he’s actually not there,” assessed Alexander-Arnold. “So there were certain parts of the game where you could just tell he wasn’t there, and would’ve been there.

Not that Liverpool’s midfield options are lacking without the 29-year-old, with Fabinho and Gini Wijnaldum the guaranteed two out of the three spots, leaving Naby Keita and Alex Oxlade-Chamberlain fighting it out as Henderson’s replacement.

Against West Ham, it was Keita who was given the opportunity from the start, but the Guinean again failed to grasp it and was subbed before the hour mark with the Reds 2-1 behind. On came Oxlade-Chamberlain in his place, unleashing a rasping drive from 30 yards within a minute of his introduction to leave no doubts over his point to prove.

“We needed that direction,” admitted Klopp post-match, as Oxlade-Chamberlain’s introduction and energy also enthused the Anfield crowd. “The dynamic helped,” said Klopp. “Always, if you get direction in a game, our people appreciate that obviously.”

What Oxlade-Chamberlain’s half-hour cameo also did was highlight Keita’s lack of influence in the preceding hour, with the former Arsenal midfielder creating more chances, completing as many key passes and recovering the ball the same amount of times, while also having a better pass completion rate.

Minutes before the substitution, first Klopp and then his assistant Pepijn Lijnders had shouted and gestured to Keita to move forward as he refused to advance his position in midfield, too often closer to the holding midfielder, Fabinho, than the front three.

It was another missed opportunity for Keita, a player who has been dogged by injuries since his arrival at Anfield in 2018. He had been the club’s record signing for a short time, before inheriting Steven Gerrard’s iconic No.8 shirt.

Perhaps Keita can take some inspiration from the man who inherited Gerrard’s armband. Henderson’s first two seasons at Liverpool were similarly underwhelming.

Signed from Sunderland for £16 million in 2011, Henderson’s first season saw him shoehorned into an unfamiliar orthodox right-midfield role by Kenny Dalglish. It was clearly not his best position and Dalglish did the youngster no favours by playing him there, while also marginalising experienced wide players Dirk Kuyt and Maxi Rodriguez, whose form the previous season had gone a long way to earning Dalglish the manager’s job full time.

It wasn’t until Brendan Rodgers arrived that Henderson was played in a more central role, roaming from midfield ahead of Gerrard and using his energetic style to full effect. That was, until Klopp somewhat debatably converted Henderson to a holding midfield role up until the middle of last season.

Fabinho’s arrival and eventual influence in midfield encouraged Henderson to ask Klopp to play him in the more box-to-box role again. A goal and an assist as a substitute in that role at Southampton on February 1 did his chances no harm. He repeated the feat against the same opposition earlier this month after returning to his more favoured role following a stint back in the holding role during a lengthy Fabinho absence.

Ironically, it was that spell without Fabinho from November to January that saw Henderson back in the holding role, and arguably playing the best football of his Liverpool career. The player himself admitted he had been watching Fabinho to pick up tips. Perhaps that desire to learn, coupled with his determination to ensure the title does not elude him this season is what inspired him.

“Hendo is exceptionally important, and not just for footballing reasons,” said Klopp in March, the manager never shy of praising his captain’s influence in the dressing room and at Melwood, the club’s training ground.

Lifting the title was always the number one focus this season, and the captain is setting the standard after coming so close last season in the Premier League.

According to those inside the club, Henderson steadfastly refused to allow any talk of the title around Melwood this year, and before the break showed this publicly when Sadio Mané was asked a question on the subject in a post-match interview alongside his captain.

Henderson is the only player remaining at the club from the 2013/14 season, and the heartbreaking manner in which that ended, so he, more than most, has reason to ensure focus remains and nothing distracts this squad.

Setbacks - from that title miss in 2014, when he had to sit out the final three games due to suspension, to captaining a side to 97 points last season and still not lifting the trophy - have got Henderson to this point today.

He has also had his share of personal problems to overcome: injuries, being asked to move to Fulham by Rodgers, and plenty of criticism in his early days at Anfield. But he constantly solved them and lets nothing get in his way. In last year’s Champions League semi-final second-leg at Anfield he picked up a knock late in the first half, but as Klopp gave his half-time teamtalk, the captain was not in the changing room – instead he was on exercise bike in the warm-up room just across the corridor, ensuring that he did not stiffen up and could still play-on during the second half.

These are the things that Klopp means when he speaks of Henderson’s influence and importance at the club on and off the pitch. These are the examples you need your captain to be setting.

And while some could easily argue that Mané in particular has been Liverpool’s ‘best’ player this season, it’s not always about who has performed best. Just look at Ryan Giggs winning the 2008/09 PFA Player of the Year despite starting just 15 league games.

Sometimes it’s the story and the qualities of the player as a person that influence voting, and in this case Henderson should be the landslide winner.

He’s had ups and downs as a Liverpool player, but it is attitude and application that has got Henderson lifting silverware.

This season, that has earned him the Premier League title, and should win him Player of the Year.