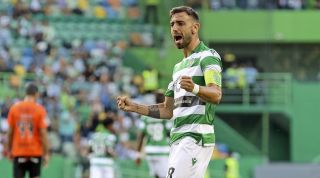 Ole Gunnar Solskjaer has refused to be drawn on speculation linking Manchester United with Bruno Fernandes.

The Sporting CP midfielder was among United's leading transfer targets last summer, and the Red Devils are said to have renewed their interest this month.

According to BBC Sport, the two clubs have held talks over a potential £60m move.

But Solskjaer has told reporters that he has no update on United's reported pursuit of the Portugal international.

"I’ve got no transfer updates, so no," he said. “If we get something that we can tell you about we will but I’ve got no news now.

"For me, the most important thing is we get results sorted, get performances on the pitch, that has got to be my focus.

“But I know we’ve got the resources, we’ve got the backing if we need to go into the transfer market. We are still up there, so still in a good place.”

United remain five points behind fourth-placed Chelsea in the race for the Champions League places following Saturday's 4-0 thrashing of Norwich.

Mason Greenwood was on target in the second half against the Canaries, and the youngster has been spoken of as a potential option for England at Euro 2020.

But while Solskjaer praised the teenager's ability, he believes talk of international recognition is premature.

"I think Mason will have a top career and a long career, let the boy settle in now before we talk about England or the Euros," he added.

"His focus has to be just on playing more for us and improving. When he plays well for us, that will happen by itself."

United host Wolves in an FA Cup third-round replay on Wednesday, before a trip to Anfield to face Liverpool this weekend.

"It's our 14th game in 45 days," Solskjaer said. "We've still got five or six games before the winter break - it's relentless - 18 games in 63 days which is physically and mentally demanding.

"We have to energise them. Bad results have to be used as a motivation, as in we're not there yet but need to keep improving. We just need the rhythm. When I was playing I felt we got rhythm of match, rest, match, rest."