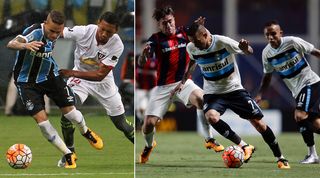 At the beginning of Ronaldinho’s career, when the promising midfielder wasn’t known all that well beyond the Porto Alegre area, a representative of Brazilian side Gremio had a different idea to keep richer teams away from their new star: putting a banner in front of their stadium that read: "We don’t sell our best players. Don’t you dare insist."

Twenty years later, FFT can tell you it didn’t work out. Ronaldinho ended up leaving for Paris Saint-Germain, and so did other products of their academy like Anderson, Lucas Leiva and Douglas Costa.

You probably haven’t heard much about him yet, but Luan Vieira might be the next one, and when Leicester make an official offer for the 23-year-old striker there won’t a banner like that one from 1999. The Premier League champions have already held talks with his agent Jair Peixoto and promised to contact Gremio within weeks.

Get ready, Jamie Vardy – if the Brazilian starlet arrives, rumour has it he’ll be picking his own shirt number.

Spanish newspaper Mundo Deportivo once called him the ‘new Neymar’. Forget about it – they’ve had totally different paths in football. The Barcelona forward has been well-known since the early stages of his career, by both fans and big clubs. Despite being from the same generation, Luan could only dream of that.

Like most Brazilian footballers, he started his career playing futsal. The main difference between him and the rest, though, is that it took longer for him to switch gymnasiums for stadiums.

Luan was already 18 by the time he made the switch and started playing for Tanabi, a small side from Sao Paulo State. A few months later, he was back in Sao Jose do Rio Preto after a loan move to another team, America, where he impressed during the prestigious Copa Sao Paulo, the most important youth competition in Brazilian football.

Some of the most famous names world football, including Neymar, Kaka and Robinho, competed there before shining at senior level. Luan’s turn came in 2013 and he couldn’t have done any better.

Former Juventus scout Junior Chavare was working as academy chief at Gremio at the time, and decided to bring the promising youngster to Porto Alegre after the tournament. He had to wait six months to finally see Luan play for the under-20 side: “He had very little time playing on the field, he wouldn’t be able to handle the exercises. We had to bet on him,” Chavare says.

Big teams such as Sao Paulo, Corinthians and Internacional had refused to sign Luan because they thought he was too thin: “I offered him more than once to Sao Paulo, but they didn’t listen to me. After Luan played the Copa Sao Paulo with America, one of their directors called me and asked if he could play for them. I remember saying ‘If you give him everything he needs to grow, in three years you’re going to have a new Kaka’,” agent Alex Rocha recalls.

Luan established himself as one of Brazil’s most dangerous strikers after Gremio replaced Luiz Felipe Scolari with Roger Machado last season. He’s probably the closest a footballer will ever be to a futsal player: he can dribble with the ball at a fast pace, making him difficult to contain, and confuses defenders with split-second changes in direction.

He’s also capable of playing through the middle or out wide, and has never bothered any coach about changing his position.

“His commitment to our work is remarkable,” said his manager Machado. “Have you ever seen him complain about playing in a different place? I can answer this one myself: never.”

Luan is everywhere on the pitch and he’s happy to set up goals as well as score them – he leads the charts in both for the Porto Alegre side, by some way too in the former category. There’s pure magic in his feet.

The 23-year-old striker is a down-to-earth footballer, but his physical condition is lacking and if he’s to face more than one match a week on a regular basis you might notice a drop in his form.

He could also work on his finishing, but his cool persona suggests he’s got what it takes to become a prolific marksman.

“He’s the kind of player that can change a game,” said ex-Brazil boss Scolari.

Luan wasn’t called up for the 2016 Copa America Centenario because he didn’t have a visa to travel to the United States. Former Brazil coach Dunga didn’t mention his name, but was unhappy with the lack of planning.

All about Vincent Janssen: The Eredivisie top scorer who's signed for Spurs

A move to Europe seems only a matter of time, with Luan’s agent Peixoto having met Leicester representatives more than once. Peixoto is also working on how to register Luan under Premier League rules for non-EU footballers; according to him, he would fall within the ‘special player’ category. Gremio are looking for a €25m fee and have already rejected an offer from Valencia.

He’ll join the Brazilian side in preparation for the Olympics shortly and will have the chance to play for the first time alongside Neymar, Gabriel Jesus and Gabigol in the hunt for the gold medal in Rio de Janeiro. If all goes well, Gremio might be able to ask for a bit more in exchange for their young striker.