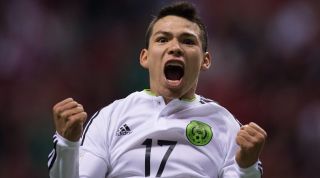 Although Lozano didn’t make his senior debut for the Mexican national team until February of this year, the Pachuca player has already garnered plenty of attention for his achievements with his country’s youth national teams, as well as in the Liga MX.

Having seemingly already outgrown the Mexican league, the winger from Mexico City appears to be on the brink of a move to a major European outfit, with Manchester United leading the race.

It’s no surprise that numerous clubs have been following Lozano's progress closely. Boasting excellent ball control and plenty of speed, the Pachuca academy product quickly became a focal point of his side's attack following his league debut in 2014. He's got better and better since then, culminating in him playing a starring role in Pachuca's championship challenge in the Liga MX last season.

With the Olympics just around the corner, Lozano looks set to garner even more attention; before potentially signing a contract with United, the winger has the opportunity to lead a talented Mexico squad to a second straight gold medal this summer.

During the Copa America Centenario, Lozano was left on the bench in the group stage but handed a starting role in Mexico's last two matches. While injuries to Javier Aquino and Jurgen Damm undoubtedly played a part in him being handed a chance, it's only a matter of time until the 20-year-old advances beyond both of those players anyway.

If he continues to rise to the occasion and develop at the pace he has up to now, Lozano could be Mexico's next world-class star, and the winger will be extremely eager to ply his trade in Europe in the forthcoming campaign.

The first thing you notice about Lozano is his pace: the speedy youngster has little trouble outrunning opponents with or without the ball. Lozano’s dribbling is also exemplary and a perfect complement to his agility, while his powerful and accurate shot from distance has caused problems for many goalkeepers.

Lozano's versatility is another major plus point: although he typically plays on the left wing, he's also adept at operating from the right or in a slightly deeper midfield role.

Lozano's strength and decision-making still need work, although a move to England would be the perfect opportunity for him to make improvements in both of those areas.

He'll certainly have to bulk up if he's to avoid being knocked off the ball in a more physical division like the Premier League, while it's to be hoped that Jose Mourinho can help him to identify when the optimum moment to release the ball is. Lozano can be guilty of holding onto possession for too long at present and must learn to get his head up and pick out a team-mate more often.

"He's no Chicharito, but rather a young, pacey right winger in the mould of a certain Cristiano Ronaldo," said Martin del Palacio, the chief editor of GiveMeSport's Spanish edition. "The 20-year-old made his first start for the Mexican national team against Canada a few months ago and promptly scored a goal that had more than a hint of the Real Madrid star."

Antonio Sanabria: The Tottenham-targeted Paraguayan who turned his back on Barcelona

Lazano has earned the nickname 'Chucky', a reference to his penchant for hiding under beds and scaring his team-mates on away days.

A move abroad to Europe seems imminent, with Lozano admitting he wants to follow in the footsteps of compatriot Javier Hernandez.

Indeed, his father-in-law has claimed Lozano will join Manchester United after the Olympics, but no official confirmation has been made by either the Red Devils or Pachuca. All the signs point to Old Trafford at the moment, but there's still time for another European giant to make a move for the 20-year-old.

Either way, Lozano is undeniably one to keep an eye on. If he can fulfil his potential at United or elsewhere, he has the abiltiy to become a global star in the coming years.