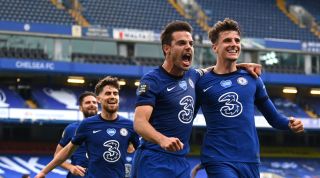 ‘Making history, not reliving it.’ That’s been the mantra – and stadium banner, no less – by which those at Stamford Bridge have lived and died since Roman Abramovich bought Chelsea in 2003.

The Blues have been rather impressive in living up to it, too, winning 16 major trophies in that time. Look at the Premier League table over the past three campaigns, though, and the danger has felt increasingly real that Chelsea fans would be turning to the history books for their future kicks.

Since 2018, the Blues have finished 30, 26 and 33 points behind that season’s Premier League champions. They haven’t come close to mustering a title challenge and, worse still, lost their best player in Eden Hazard among it all to Real Madrid last summer.

But while things had appeared bleak on the back of the Belgian’s departure, Frank Lampard has given Chelsea a new sense of purpose and possibility.

His appointment as manager hasn’t just repaired a fractured fanbase, but brought with it much-needed change on the pitch. His refreshed Chelsea squad is the youngest it has been this century, packed full of exciting academy graduates and emerging stars in Christian Pulisic and new signing Timo Werner.

Last season, we saw a very different Chelsea – a team that was so effervescent and unafraid to attack opponents.  For all of that joie de vivre upfront, however, the Blues were dire defensively. They tend to overcommit in attack, leaving them susceptible on the break.

If Lampard’s side are to bridge that gaping chasm to Liverpool in 2020-21, things have to change at the back – and quick. In conceding 54 times, their worst figure since 1996–97, Chelsea shipped more goals than they did even in that dreadful 2015-16 season, when they finished 10th.

It’s no coincidence that such frailties have hampered Chelsea in the three years since John Terry left. That ended a 20-year spell of commanding defensive talent in west London, the former skipper having inherited his position from Marcel Desailly. Lampard’s constant tinkering at the back suggests that he’s looking for solutions, although a shortened summer break isn’t going to help him with that.

Being the best of the rest in 2021 will be a step forward. But serious title contenders? Give Lampard another 12 months to come good on that one.