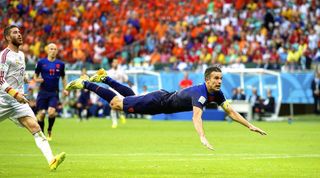 Chelsea fans have become accustomed to the Brazil-born hitman netting this season, but they haven't quite seen anything like this from their flourishing striker just yet. Throwing himself at a cross from Atletico Madrid favourite Gabi, the bull-like Blues hitman holds off his marker before planting an overhead kick past busy Getafe goalkeeper Miguel Angel Moya (who's now playing for the Rojiblancos). This was the fifth in a 7-0 win. Ouch.

We're used to seeing Ibra take the mickey – last year's winning effort against England will attest to that (warning: features interesting commentary from Stan Collymore). The burly Swede isn't short of a beauty or two for his imminent retirement highlights reel, but even in his twilight years Zlatan has continued adding to the pile. Watch here as he transforms a relatively harmless looping ball into a goal with a craftily-aimed backheel. Bastia's backline didn't stand a chance.

The World Cup 2014 Golden Boot winner earned himself a mega-money move to Real Madrid with beauties like this one. The twinkle-toed midfielder netted both goals in this crucial last 16 clash in Rio, but scooped FIFA's Goal of the Tournament award with this two-touch pearler from outside the box. Bravo, sir.

Sato's professional career is hardly noteworthy for football fans outside Japan, but the Sanfrecce Hiroshima hero has forged a respectable name for himself on home shores with net-busters like this. Collecting a low ball just outside the box, the 32-year-old scoops the ball into the air before looping an unstoppable shot over a keeper who can only stand and admire. His J-League goal record isn't half bad either – 146 goals in 282 league games for his current side.

Remember the name, Camilo Sanvezzo! Or on second thoughts, don't bother. Though this terrific scissor-kick from just inside the box warrants its rightful place on this list, 26-year-old Sanvezzo was on the move again in January this year with a Vancouver Whitecaps record sale (not hard, considering they've only been about since 2009) to Mexico's Queretaro (after spells in South Korea and Malta). Maybe with a few more of these he might settle somewhere.

The corner flag-bopping former Everton man was beloved for his aerial ability in the Premier League, but proved at the World Cup that it wasn't limited to his noggin. Letting a long and (really) high ball drop over his shoulder, the current New York Red Bulls man eventually launches a rocket off his left foot and off the bar past an unsuspecting Jasper Cillessen. Sadly for Tim it didn't stop the Socceroos from losing 3-2 in Porto Alegre.

For a header to be so high on this list, it has to be a ruddy good one. Luckily for Van Persie, his against Spain in the Netherlands' opening-game demolition of Spain most certainly was. Waiting for a looping ball from future Manchester United team-mate Daley Blind to drop, the former Gunner flops like a salmon to pop the ball over Iker Casillas and send Louis van Gaal potty. The Dutch bagged four more, Spain slinked away shamefully and Van Persie finished the tournament with four goals. Who needs Batm- oh, fine.

Ooh-ah Cantona with added va va voom. Only Fabian isn't French and doesn't play for Manchester United. Nevertheless, this sickeningly good effort against Puebla earlier this year earns himself a place in our top three. The control alone is special enough, but the Mexico international's subsequent turn and chip over the goalkeeper from 18 yards catapults it into 'phwoooaaar' territory.

Peamount United might sound like a kids team in America, but in fact they're one of the best ladies' sides in Ireland thanks to wonder-goals like this. Step forward Republic of Ireland international Stephanie Roche, whose stunning volley is well in contention to win this year's grand prize. Teeing up a hopeful pass with her back to goal, the second touch takes the ball over her marker's head, and the third into the back of the net with a rasping left-foot volley. Having outgrown the Women's National League, Roche joined Division 1 Féminine hopefuls ASPTT Albi in the summer. Très bien!

The day after Roche netted her net-buster, Fulham's Kasami went and trumped it with this. Simply, the Switzerland international had no right to score this worldie against Crystal Palace – surely one of the Premier League's greatest-ever goals. (Stupid voters of Match of the Day didn't even pick is as the top flight's best goal last season.) When right-back Sascha Riether picked the ball up near the halfway line, Kasami had only just started his run from a similar position. Riether picked him out after his Swiss team-mate's quick burst forward, but even then there was serious work to do. Yet two touches later the ball was in after a majestic chest-and-volley combo stunned Selhurst Park and sent Fulham on their way to a 4-1 win. Ridiculous.