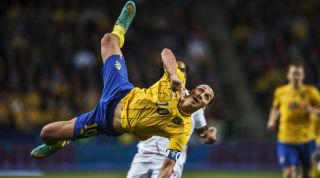 England take on Sweden in a rather more important game in Russia this summer, but the last time these two nations faced off was memorable for one man’s display.

Then-PSG striker Zlatan Ibrahimovic scored four goals in Sweden’s 4-2 win – his last strike being a spectacular, long-range overhead kick lob that may be the best goal he’s ever scored. Which is really saying something.

But what we’re quizzing you on today is that England side from six years ago. There’s been plenty of change since then – and it was a pretty fresh line-up as it was. England manager Roy Hodgson used the game to give no fewer than six players their senior international debut.

Now, four minutes are on the clock for you to name the starting XI, plus the six substitutes who all came on in the second half. Let us know how you get on @FourFourTwo – we’ll retweet the best scores, if you don’t give answers away. Challenge some friends while you’re at it as well...