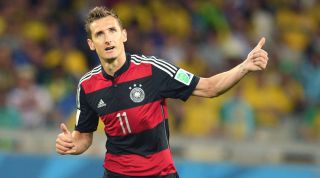 You have 10 minutes to guess 71 countries.

THEN TRY Quiz! Can you name the top three countries in FIFA's world rankings since 1993?

Do you remember the moment that Miroslav Klose broke that record?

The World Cup's greatest ever goalscorer was officially crowned at the Maracana, during the 7-1 mauling against Brazil. It was to be his 71st and final goal in a Germany shirt; the Polish-born hitman sliding home his 16th goal at a finals.

What made it even more significant was that Super Miroslav was overtaking Brazil's Ronaldo at the top of the charts. It felt like the perfect culmination of a career.

Can you remember who else Klose scored against? We've given you 10 whole minutes to list everyone. Alles Gute zum Geburtstag, Miroslav!