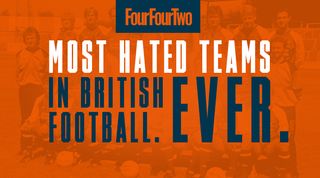 Yet what connects the majority (if not quite all) of them is, simply, success. Most of these teams picked up opprobrium and victories at the same rate. So if your club - even if it’s a team you personally loved – is on this list, please don’t be offended.

It’s actually a backhanded compliment to be hated, as fans of every disliked sporting club in the world from Real Madrid to the New York Yankees (admittedly yet to try their hands at football - thankfully) will tell you.

That said, it’s not quite the case for number 30 on our list, who mainly just drew ire from the poor fans paying to watch them.

Following Howard Wilkinson’s dismissal after a 4-0 home shellacking by Manchester United in September, Leeds became almost cartoonish for their sheer awfulness on the eye. No top-flight team had ever scored fewer than the 28 goals they notched up that season, with Brian Deane often marooned as a lone lamp post up front.

The appointment of new boss George Graham, recently returned from his one-year ban for accepting illicit payments while with Arsenal, meant even Leeds fans now hated their own side.

Adopting the same mean machine approach he’d used at Highbury, Graham ensured Leeds kept a staggering 20 clean sheets in the league, while he criticised the likes of Rod Wallace and Lee Sharpe for their inconsistency. After failing to score in no fewer than 21 league matches, that Leeds team are statistically the dullest and most unloved Premier League team ever.

Chief Villain: Clearly, Graham. But also, after a heroic first 18 months at Elland Road, striker Tony Yeboah put on a shed load of weight (fuelled according to popular legend by his love of Yorkshire puds). How could you, Tony? If any team desperately needed your ace finishing, it was this lot.

Liverpool came very close to ending their long wait for a league title in 2013/14, with a jaw-droppingly entertaining team packed with characters it was hard to warm to – from world judo champion Martin Skrtel in defence, two-club man Steven Gerrard in midfield and bitey racial abuser Luis Suarez leading the line (quite brilliantly, it has to be said).

In the end, it was the weight of history that did them in – too much pressure on themselves. Gerrard failed to heed his own advice from that infamous, “This does not f**king slip now” speech, and the scrambling, haunting attempt to recover after stumbling against Chelsea still sticks in the mind.

Many loved this admittedly thrilling Liverpool run, but were was also a healthy dose of schadenfreude from rival fans at the 2-0 defeat by Chelsea and the throwing away of a 3-0 lead at Crystal Palace. Although that did open the door for Manchester City to take the title, which is arguably worse.

Chief villain: Liverpool’s smugness seemed to be epitomised by their manager Brendan Rodgers, whose reputation never really recovered from Being Liverpool - which applied The Office’s ‘mockumentary’ treatment to the David Brent of football.

Argentina ‘78 remains the only World Cup Scots talk about. Ally MacLeod’s squad, graced by the likes of Kenny Dalglish, Graeme Souness, Alan Hansen, Archie Gemmill and Joe Jordan, were confident of qualifying from a group containing Holland, Iran and Peru.

Even so, MacLeod’s pronouncement that “You can mark 25 June 1978 as the day Scotland conquers the world” struck many as overconfidence bordering on arrogance. A 3-1 loss to Peru was overshadowed by winger Willie Johnston’s ban for failing a drugs test.

Worse still was a 1-1 draw with Iran. MacLeod blamed this on the hotel swimming pool – it had no water in it so his players could not relax with a swim. Honour was partially redeemed with a glorious, albeit irrelevant, 3-2 win over the Dutch.

Chief villain: Ally MacLeod was out of his depth. Against Peru, who had equalised two minutes before the interval, his only half-time tactical instruction was to tell goalkeeper Alan Rough: “Hoof it long”.

A pervading sense of capital city arrogance has always made it easy for Welsh fans to loathe Cardiff. But the arrival of Sam ‘Crazy Gang’ Hammam as chairman in 2000 upped the hatred a notch or six.

If Hammam wasn’t promising to make the entire Welsh nation support the Bluebirds, he was pretentiously describing his new club as the ‘Barcelona of Wales’. He impressed Cardiff fans by joining in their ‘Do the Ayatollah’ celebration and remains a cult hero to some, even though he later sold the club to Peter Ridsdale.

Chief villain: Self-publicising, self-aggrandising Sam Hammam. The chairman gave Cardiff a bad name all on his own.

Alf Ramsey didn’t win the World Cup, West Ham United did. All four England goals in the final were scored by Hammers – Geoff Hurst got his historic hat-trick and Martin Peters nabbed the other one - while skipper Bobby Moore lifted the Jules Rimet trophy.

So why are England fans often begrudging in their thanks to the East End club? Well, it’s nothing to do with the fine trio of lads themselves. It’s more that Hammers fans have been so ceaseless in carping on about their World Cup triumph for over 50 years that a latent dislike has built up over time.

So you might be pleased to know that West Ham did not get to bask in their glory for long at the actual time. On the first day of the 1966/67 season, chippy Chelsea beat the Hammers 2-1 at Upton Park, with a Scot (winger Charlie Cooke) scoring the winner. After losing their next two games, West Ham fell into the relegation zone, but eventually finished 16th, seven points from the drop. After the Hammers lost to Swindon in the FA Cup third round, irate fans smashed the windows of Moore’s sports shop.

Chief villain: Ron Greenwood. As Moore said: “Ron talked about the game at such a high level, that some days only a couple of us understood what he was talking about.”

Sol Campbell’s time at Notts County lasted about as long - and went about as well - as his brief foray into politics. The defender was one of a number of acquisitions made after the club was taken over by the mysterious Munto Finance before the 2009/10 League Two season. The wealthy Middle Eastern backers wanted to pull off a Chelsea/Manchester City-style spending spree to take the oldest club in the Football League to the top flight.

Sven-Goran Eriksson – never one to turn down a lucrative job offer from a mysterious stranger in a five-star hotel – was brought in as director of football, while bruising targetman Lee Hughes arrived from Oldham on the same day (he’d been a Premier League player until spending three years in jail for causing death by dangerous driving).

Campbell lasted one game, and Sven seven months - but Hughes smashed in 33 goals as the Magpies won League Two at a stroll, despite chaos off the pitch.

Chief villain: Russell King (nicknamed Lord Voldemort - seriously) was the architect of the takeover, along with Nathan Willett. It turned out to be little more than a con trick, as bills went unpaid and the club racked up millions of pounds of debt.

At the end of this season, when they recovered under Guus Hiddink to finish third in the Premier League and win the FA Cup, the Chelsea players all chipped in to give their interim manager a signed home shirt, plus a Rolex engraved with a personal message. But what words best sum up that season?

“It’s a f**king disgrace,” are four that stick in the mind - from Didier Drogba’s tantrum at the end of the Champions League semi-final, a game in which Danish referee Tom Henning Ovrebo turned down six Chelsea penalty shouts.

The likeable Hiddink and Big Phil Scolari aside, there was plenty about this physical, vulgar, nouveau riche Chelsea side to turn the stomach, from Jose Bosingwa’s monobrow to Drogba’s flip-flop rage. Just look at the defenders - Bosingwa, Alex, John Terry and Ashley Cole were the regular starters, with the dastardly Ricardo Carvalho waiting on the bench alongside an increasingly dejected Wayne Bridge.

Chief villain: A great player, but few things on earth moved as quickly as an “injured” Drogba launching himself out of the foetal position to harangue a referee.

The unravelling of ‘boring, boring’ Arsenal was more entertaining than anything that had happened under George Graham since he’d outwitted Kenny Dalglish to win the title at Anfield in 1989. Paul Merson wrestled with his addictions for months, Graham was sacked for taking bungs and David Seaman was lobbed – in an eerie prequel of England vs Brazil in 2002 – from the halfway line by Nayim in the European Cup Winners’ Cup final.

The national glee that greeted Real Zaragoza’s triumph underlined the folly of Graham’s quixotic campaign to make Arsenal’s results resemble the output of a binary computer. Gooners still shiver at the memory of that 1994/95 squad, studded with such greats as Carter, Flatts, Hillier, Lydersen, Marshall, Morrow, Selley and Shaw.

Chief villain: Tony Adams. More of the pantomime kind, in truth, thanks to the "ee-or" chants and a spell at Her Majesty’s pleasure in 1991.

Blades goalkeeper Paddy Kenny had his eyebrow bitten off in a brawl in Halifax - and it it still wasn’t the craziest story to come out of the Sheffield United dressing room in their most recent Premier League campaign, one which ended with a controversial relegation on goal difference.

Earlier that season, it was reported that defender Claude Davis had threatened teammate Ade Akinbiyi with a cut-throat razor after a training ground row - something which raises so many questions it’s impossible to know where to start.

Overseeing the madness was Neil Warnock, the man who looks like your great aunt sucking on a lemon. He raged against his own players, against West Ham for the Carlos Tevez affair and, after resigning a few days after relegation, against Alex Ferguson and Rafa Benitez, who he accused of playing weakened sides towards the end of the season.

"What goes around comes around and maybe Chelsea will win the FA Cup and Milan the Champions League,” Warnock said. Let’s hope he switched off at half-time.

Chief villain: Plenty within the club blamed Warnock - their manager of seven years - for relegation, including director Sean Bean, who reportedly went looking for him after the last game of the season and launched a “foul-mouthed tirade” in front of Warnock’s young son, the manager claimed. Bean starkly denied it.

Having made steady progress with 15th, ninth and seventh-placed finishes in the Conference, an anonymous Hong Kong benefactor gave the Red Devils’ squad a power boost, as they recruited more than 20 players in six months.

Matt Tubbs’ 37 goals saw Crawley steamroller the fifth tier with a record number of points (105), while a run to the fifth round of the FA Cup and a trip to Manchester United provided plenty of publicity. Manager Steve Evans was no stranger to controversy: found guilty of conspiring to evade tax at previous club Boston United, he was sent from the dugout so often in 2007/08 that he was banned for 10 games.

With typical modesty, Evans celebrated Crawley’s success by saying his team should rise from League Two at the first attempt. They did just that, although Evans wasn’t there to see them clinch promotion at Accrington, after agreeing to take charge of Rotherham a month earlier.

Chief villain: Richard Brodie. A panto villain who revelled in the attention from opposing supporters, Brodie’s move from York to Crawley was claimed to be £275,000, a record fee between two non-league clubs. His late header at Old Trafford hit the bar.