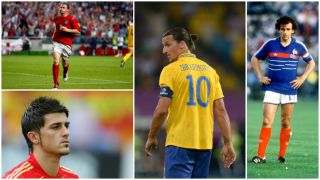 This illustrious record belongs to France’s legendary No.10, a shirt number which was passed onto Zinedine Zidane and now rests on the shoulders of Paul Pogba.

It says a lot about just how good Platini was at Euro 1984 that he needed just that tournament (five games to be precise) to take hold a record that runs across the finals as a whole. Two hat-tricks in the group stage put him well on his way, before the Juventus maestro scored in the semi-final and final as France took the title.

Zlatan Ibrahimovic and Cristiano Ronaldo are the closest to overtaking Platini – both require four to topple the Frenchman – and Wayne Rooney is third-closest, having scored five goals in European Championships.

Most tournaments with at least two goals (3)

Sweden's hitman has scored twice in each of the three tournaments he's participated in. Alan Shearer shares one record with Ibrahimovic: the most games scored in (6).

Zlatan began Euro 2004 with a penalty against Bulgaria in Sweden’s 5-0 rout. He then doubled his tournament tally with a late equaliser against Italy – a goal which sent Sweden through to the knockout stages and the Azzurri packing.

For the third tournament running, Zlatan hit the back of the net in Sweden’s first game of the tournament in 2012, but an Andriy Shevchenko brace sealed a Ukraine victory on home turf. A 2-0 triumph over France wasn't enough for Sweden to qualify, but Ibrahimovic still got his name on the scoresheet with an incredible volleyed effort.

Most goals scored in a Finals match (3)

Euro 2008 was one to remember for both Spain fans and David Villa. Four goals were enough for the striker to claim the tournament’s Golden Boot, with three of those strikes coming in Spain's first group game against Russia.

Most consecutive matches with a brace (2)

A teenage Rooney hit four goals in two England games at Euro 2004, with his first double coming against Switzerland and his second in the victory over Croatia.

After almost two hours without a goal, this game was on the verge of coming to an end when Werder Bremen striker Ivan Klasnic headed Croatia ahead from close range in the 119th minute. But just two minutes later, Semih Senturk sent the match to a penalty shootout after blasting the ball into the back of the net in one of the most dramatic finishes to a game in European Championship history.

This will be a tough record to break, but with an additional knockout round in this year's competition, there could be plenty of extra-time drama in store.

Vonlanthen's goal against France in 2004 made him the youngest-ever goalscorer in Euros history, just four days after Rooney – who was three months older than the winger – had taken the record.

The former PSV forward later retired at the age of 26 following the birth of his first son, only to reconsider and return to football a year later. He currently plays for Servette in his homeland.

Vonlanthen’s record will survive at least another edition of the tournament – there isn't a younger player competing in France this summer.

... and then some from qualifying

Most goals scored, including qualifying (26)

Ronaldo scored twice in his first Euro finals in 2004 but was unable to help Portugal win their first piece of silverware at senior level as the hosts lost to Greece in the final.

While the Portuguese haven't come any closer to success since, Ronaldo has continued to hit the back of the net with regularlity. The Real Madrid forward scored nine in 2008, 10 in 2012 and five in the most recent qualifying campaign, although only six of his 26 goals in UEFA matches have come in finals tournaments.

Most goals scored in qualifying (23)

Ireland's captain scored his first goal for his nation at the age of 18 but has competed in only two European Championships since.

Keane has still been prolific in the qualifying stage, however, although Ronaldo's 20 strikes means he could overtake the veteran Irishman when the next campaign begins in 2018.

Most goals scored in a single qualifying campaign (13)

The Bayern Munich striker also headed one past his club team-mate Manuel Neuer in Poland’s 3-1 defeat by Germany in September last year.