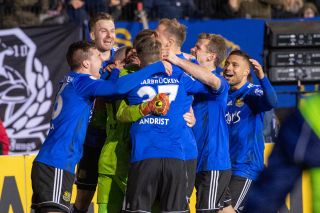 The magic of the cup is still going strong in Deutschland as FC Saarbrucken prepare for a German Cup semi-final clash with Bayer Leverkusen this evening.

The tiny team from the western state of Saarland - on the German-French border - became the first team from outside Germany’s top three divisions to reach the semis when they defeated top-flight club Fortuna Dusseldorf on penalties at the beginning of March. They’d already seen off Bundesliga side Cologne in the second round, as well as second division side Karlsruhe in the last-16.

While other teams from the fourth-tier have their feet up awaiting a new season, Saarbrucken have spent the last 93 days preparing for the biggest match in the club’s history, against yet another Bundesliga powerhouse.

Win or lose, Saarbrucken will look back on a glorious season, which also saw them promoted as fourth division champions - they were six points clear when authorities cancelled the season and awarded them promotion to the 3. Bundesliga.

If they pull off another impossible job, they’ll have one more to go, with either Bayern Munich or Eintracht Frankfurt awaiting in the final. The other semi takes place on Wednesday, June 10.

Forget the Crazy Gang versus the Culture Club, should Saarbrucken go all the way, this will have been a giant slaying on a far greater scale. You won't want to miss it.

How to watch Saarbrucken vs. Bayer Leverkusen & Bayern Munich vs. Eintracht Frankfurt

How to watch a German football live stream for UK subscribers