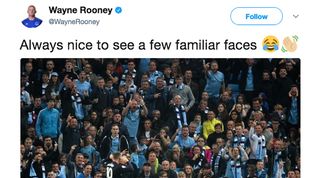 When Rooney broke the deadlock for 'new' club Everton and joined the Premier League's ‘200 club’ on Monday night, you could hardly blame the former Manchester United man for going a bit loopy in front of City's home faithfull.

But three Manchester City fans in particular must have experienced a major bout of déjà vu as Wazza wheeled away in front of them.

Gesticulating just as they were four years ago, the supporters threw up fingers and hurled abuse at the former United man as he enjoyed his moment in Everton's 1-1 draw at the Etihad Stadium.

Rooney later joked on Twitter about seeing some ‘familiar faces’ in the crowd. He'll be hoping this isn't the last time he gets to say hello.