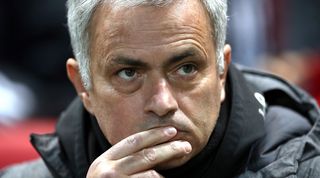 Most children fantasise about living in a hotel. Like Macaulay Culkin in Home Alone 2; room service every night, ice cream in bed, erecting dancing figurines behind the shower curtain. This has presumably been Jose Mourinho’s life for the past 18 months, living out a suitcase at the Lowry Hotel as manager of Manchester United.

Of course, this is hardly an ideal situation for an adult of 54 years old, but it became a symbol of how Mourinho never sticks around in any one place for any great deal of time. Manchester United, it was thought, would just be another stop on the pan-European circuit of the Portuguese’s career to date. When it came time to move on, Mourinho would just have a suitcase to pack up and a room key to hand in.

And yet he has now signed a contract extension at Old Trafford. The Portuguese coach initially penned a three-year deal to become United manager back in the summer of 2016, with the option of an additional 12 months. But the extension lengthens his stay to at least 2020, with an option for a further year.

On the face of things, this goes against the grain of what we have come to expect from Mourinho. He's a manager who works in short bursts, prioritising the short term over the long term. All that matters to Mourinho is the present day, demonstrated by his pushing through of the deal that this week saw the 29-year-old Alexis Sanchez become the highest-paid player in England.

However, this is a play that goes exactly to form for Mourinho. He has made a habit of signing a new contract, or at least discussing the signing of a new contract, shortly before leaving. He did it at Inter and Real Madrid, also inking a new four-year deal at Chelsea just four months before he was sacked at Stamford Bridge.

This might be Mourinho protecting himself. There have been signs this season that the Portuguese is beginning to unravel amid a (hitherto unsuccessful) duel with Pep Guardiola. Mourinho might already have an idea of what his expiry date at Manchester United will be.

By this token, what was in it for Manchester United and executive vice-chairman Ed Woodward to offer Mourinho a new contract at this specific point in time? Keep in mind that the manager is yet to fully convince that his project of restoring the club as a genuine force both domestically and on the continent is working. United might have picked up two pieces of silverware last season, but they should be regarded as mere jumping-off points. More must follow.

Why didn't United wait until the end of the season, giving themselves more time to judge whether Mourinho is on the right path, before making a contract offer? Was this a sign of genuine fear at Old Trafford that Paris Saint-Germain could lure their manager away? Was there more to Mourinho’s open flirting with the French club than just mischief making?

Alternatively, it could be a sign that in the post-Sir Alex Ferguson age, after the failures of David Moyes and Louis van Gaal, that there has been a subtle lowering of expectations at Old Trafford. Perhaps this is a club so relieved just to be part of the chasing pack again that, right now, they are willing to abandon common sense when it comes to their current manager. Over time, however, this could prove to be another black mark on Woodward's decision-making record.

Additionally, Manchester United are a club increasingly defined by the cash they generate. In January 2018, they were confirmed as football’s biggest revenue rakers, having collected €676m in 2016/17 without even participating in the Champions League. But now that the Reds have once again pulled up a seat at the top table, they’ll do everything to retain it. Mourinho almost guarantees Champions League qualification, even when league titles are out of reach.

This might be doing Mourinho a disservice and downplaying his achievements so far. It’s true that this is the best Manchester United team since the days of Sir Alex Ferguson – and by quite some distance too. There has been undeniable progress under the Portuguese, and much of this has been down to the signings made over the past 18 months.

Mourinho is a draw to prospective players in the way neither Moyes nor Van Gaal were. Would Paul Pogba have signed for a then-world-record fee had either of Mourinho’s predecessors been in charge? Could Moyes have lured Alexis Sanchez from under the noses of Manchester City? It seems unlikely.

Football's 10 most memorable transfer swaps... and which club got the better deal

It’s not so much the decision to offer Mourinho a contract extension that baffles, but the January 2018 timing of it. Woodward will be well aware of the pattern that the former Porto, Chelsea, Inter and Real Madrid manager’s career has followed to date. That is just part of the Mourinho package. Why would Woodward leave himself so open to being played?

But maybe, just maybe, Mourinho really does intend to stay at Manchester United for many years to come. The Portuguese has previously expressed his desire to build a dynasty somewhere. It was upon his return to Chelsea nearly five years ago that he made such remarks, but perhaps United is the club for Mourinho to finally make good on those intentions.

At this stage of his United career, though, the receptionist at the Lowry Hotel might have the best inklings of us all. Has anyone examined the checkout date against his room reservation?