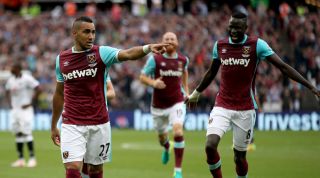 Payet’s performance was cause for both optimism and concern; he was superb for the first half hour, but as he inevitably fatigued his team-mates continued to rely heavily upon him. More variation is needed in West Ham’s build-up play if they are to get out of this sticky patch.

Payet’s wonderful rabona assist came from the right wing but most of his work was on the other side. The Frenchman cleverly exploited the gaps in Watford’s 3-5-2 formation, operating wider than usual in order to sit in the pocket of space between right centre-back and right wing-back. The away team had no idea how to cope with his movement, and only looked like winning the game once Payet became visibly tired.

Against champions Leicester, Liverpool’s tactical set-up was quite similar to Manchester City’s in the first two weeks of the season. Full-backs James Milner and Nathaniel Clyne tucked inside to help out in central midfield, allowing both Georginio Wijnaldum and Adam Lallana to roam further forward. Their interplay with the Reds’ forwards in the final third was superb.

Mane played a big role from the right wing, exploiting his team-mates’ decoy runs by driving infield and arriving late in the penalty area. Leicester had no idea how to cope with the overload of bodies in central areas; N’Golo Kante’s absence was conspicuous.

Mustafi enjoyed a competent debut, and his excellent passing stats suggest that Arsene Wenger has signed a significant upgrade on Per Mertesacker. The German was aggressive in his approach, constantly looking for the incisive forward pass that would carve open Southampton’s midfield.

His impressive pass rate, though, perhaps tells us more about Southampton’s defensive shape and Arsenal’s lack of penetration than it does Mustafi’s individual skill. Claude Puel’s team sat in a very deep, flat 4-5-1 shape, applying no pressure whatsoever to Mustafi or Laurent Koscielny.

Wenger’s team were pretty static themselves, playing too wide to create the quick passing triangles needed to pull Saints apart. Theo Walcott and Lucas Perez had just 56 touches of the ball between them, while Arsenal scored with their only two shots on target.

Romeu has occasionally underwhelmed in a Southampton shirt, but the former Chelsea midfielder revelled in his simplified role on Saturday. He only needed to cover a small area of the pitch in Saints’ deep-lying 3-5-2 formation (see above), which diminished the impact of his most prominent flaws.

Romeu struggles to move up and down the pitch with the same instinctive intelligence as Victor Wanyama, and can get caught out when trying to play a more expansive game. At the Emirates, he simply sat in the defensive midfield zone and concentrated on what he does best by amassing four tackles and four interceptions.

No Premier League player has made more interceptions, clearances, or blocks this season than Hull’s Davies. And after another imperious display against Burnley, Sam Allardyce could well be considering him for the next England squad.

Davies’s aggressive defending is defined by his intercepting ability. He regularly steps out of the backline to cut off a pass, making 10 on Saturday and averaging a remarkable 7.8 over the first four games. Once a fragile and unreliable defender, Davies has improved with age and is currently one of the most composed, intelligent centre-backs in the country.

Alan Pardew’s counter-attacking philosophy is extremely consistent. He likes his teams to advance quickly down the flanks, crossing as frequently as possible and minimising short passing. Last season Palace attacked down the flanks 76% of the time, more than any other team (currently 73% for 2016/17), and attempted the most crosses (26 per match) in the division – a stat which has risen to 30 so far this campaign.

Benteke is exactly the player Crystal Palace needed. His aerial prowess gives them a fulcrum when beginning to counter (they attempt 48 long balls per match, the fourth most in the league), as well as a target for those tricky wingers to hit when they get to the byline. Benteke should win this category most weeks.

Middlesbrough’s new Spanish defender has made a competent start to life in the Premier League. He managed Andros Townsend very well on Saturday, frequently showing him onto his right foot and limiting the former Spurs winger to just two crosses from that side.

4 key notes from Swansea 2-2 Chelsea: Why Costa’s more than just a goalscorer

Barragan was one of several coups for Middlesbrough over the summer; the Spaniard featured in 24 of Valencia’s La Liga games last season. He has already played centre-back and left-back in the league this season, but is expected to hold down the right-back slot from now on. Despite losing 2-1, though, Middlesbrough once again looked like they are ready for Premier League football.