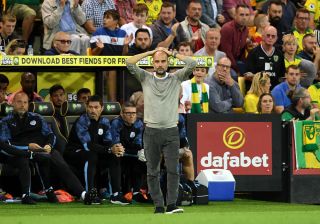 Liverpool have taken an early stranglehold on the Premier League after a 100 per cent start to the season with reigning champions Manchester City having suffered an uncharacteristic wobble.

Frank Lampard’s fledgling reign as Chelsea boss has taken a turn for the better, while promoted Norwich are gradually getting to grips with life in the top flight having secured a famous win.

City are going to have to find a solution to their problems at the back if they are to retain their title. Norwich turned in a fine performance to secure an unlikely 3-2 victory at Carrow Road, but they were aided and abetted by some shambolic defending from the visitors, who will be without the injured Aymeric Laporte until the new year. Kenny McLean and Todd Cantwell took full advantage to give the home side a 2-0 lead, but Teemu Pukki’s third was a study in incompetence as Nicolas Otamendi and John Stones combined to present him with a simple chance.

Emiliano Buendia is living proof that there are bargains out there in an increasingly expensive transfer market. The 22-year-old Argentinian, who cost Norwich around £1.5million when they signed him from Getafe last summer, played a key role in their promotion campaign and starred in their win over Manchester City, repeatedly breaking up play and charting a way through Pep Guardiola’s press to set his team on their way.

Lampard has placed a huge weight on Tammy Abraham’s shoulders, and the 21-year-old has responded in impressive style with seven goals in his last three games. His hat-trick in Saturday’s 5-2 win at Wolves demonstrated the talent at his disposal, scoring first with a well-placed shot in the turn, then a bullet header before saving the best for last when he tricked his way past defender Conor Coady and fired inside the far post to leave keeper Rui Patricio helpless.

Former Newcastle boss Rafael Benitez was repeatedly criticised during his time on Tyneside for adopting an ultra-defensive system against the Premier League’s big guns, and his successor Steve Bruce has attempted to shift the balance. He was rewarded for a slightly more progressive approach with a fine win at Tottenham and he was given hope of a repeat at Liverpool when Jetro Willems blasted the visitors ahead. However, errors from wing-back Emil Krafth and then midfielder Christian Atsu and keeper Martin Dubravka allowed Sadio Mane to turn the tide. There was little anyone could do to prevent Mohamed Salah from sealing a 3-1 win after running on to Roberto Firmino’s breathtaking pass.

54’ Ollie Norwood puts in a brilliant ball from the right and Oli McBurnie slots it home but after consulting the VAR, Lee Mason overturns the goal due to John Egan being in an offside position in the build up.— Sheffield United (@SheffieldUnited) September 14, 2019

Sheffield United have more than made a fist of life in the big time, but they discovered this weekend that when your luck is out, it is out. They thought they had taken the lead against Southampton when Oli McBurnie turned home Oliver Norwood’s free-kick only for his effort to be correctly ruled out for offside, and then had strong penalty appeals waved away before striker Billy Sharp was sent off for a challenge which might have warranted only a yellow card as they went down 1-0.