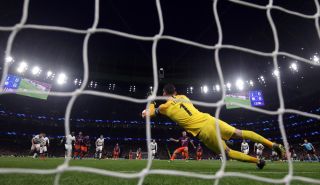 Tottenham beat Manchester City 1-0 in the first leg of their Champions League quarter-final.

Quadruple on the line

Liverpool showed last season that the best way to beat City is to take them on at their own game by pressing high and looking to break with pace. The problem with that blueprint, however, is teams have to be very good to pull it off. City are good enough to adapt their game and pick off any weaknesses. Spurs have suffered in the past but, on this occasion, they proved they were up to the challenge. Doubtless feeding off the energy of the fans in their new stadium, they really worried their opponents and grabbed a deserved winner to give themselves a fighting chance of going through. City’s quadruple hopes, although far from over, are on the line.

Tottenham will be very concerned about the fitness of Harry Kane after their talisman suffered what looked like another ankle injury in the second half and was carried straight down the tunnel. The England captain has already endured one month-long lay-off for ligament damage in 2019 and there will be fears he could miss the second leg and other vital matches in the run-in.

Mauricio Pochettino is no fan of VAR and the early penalty incident involving Danny Rose will hardly have changed his mind. City showed not the slightest inclination in appealing for what seemed an obvious case of ball to hand against the Spurs left-back. However, referee Bjorn Kuipers was advised to review the incident and – under UEFA’s strict interpretation of handball – was obliged to award the spot-kick. The controversy was not the role of Kuipers but why the VAR thought he had made a “clear and obvious error” and the way UEFA is applying the handball law.

Rose has had a difficult few weeks in the spotlight after being racially abused while on England duty in Montenegro. So frustrated by how authorities are dealing with that issue, he said last week he “can’t wait to see the back” of the game. Spurs supporters certainly got behind their man, with loud chants for him early in the game. Proud Lilywhites, the Spurs LGBT+ supporters association, also unveiled a banner in support of him.

If there was anything that could take the gloss off another fine night for Spurs in their new home, it was the supporter who got onto the field in the latter stages. He did not approach any players – it was Fabian Delph who moved towards him – but it was a concerning security breach.