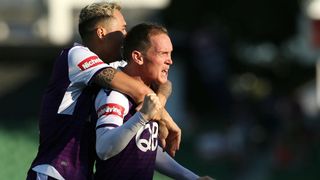 Perth Glory cruised to a 2-0 home win over struggling Newcastle Jets to move four points clear at the A-League summit once again, while Adelaide United left it late in a 2-1 defeat of Central Coast Mariners.

The Jets rarely looked like they were going to cause Glory many problems on Sunday, with the writing seemingly on the wall early on.

Andy Keogh broke the deadlock for the hosts in the 16th minute, tapping in from close range after Diego Castro squared to him right in front of goalkeeper Glen Moss.

Neil Kilkenny wrapped things up in style early in the second half, cutting in from the left and bending a fine effort into the top corner from 20 yards out.

The day's earlier contest saw Adelaide come from behind to triumph at Adelaide Oval.

Andrew Hoole's stunning drive put the Mariners ahead late in the first half, but the second period belonged to the hosts.

Isaias levelled just past the hour, netting during a goalmouth scramble and that spurred United on to get the winner.

George Blackwood nodded in from Scott Galloway's cross in the second minute of stoppage time, inflicting a third successive defeat on the Mariners.

TURNAROUND! The boys grew stronger in the second to get the win through goals to @isaias_sc8 and George Blackwood! #AUFC#ADLvCCMpic.twitter.com/zEAAdnxNaI— Adelaide United (@AdelaideUnited) January 27, 2019