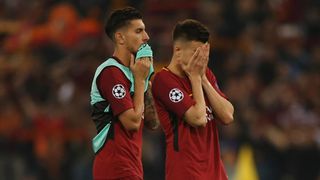 James Pallotta labelled the officiating "embarrassing" as the furious Roma president demanded the video assistant referee (VAR) be introduced in the Champions League following the club's semi-final defeat to Liverpool.

Roma missed out on a spot in the final against Real Madrid despite Wednesday's 4-2 victory at the Stadio Olimpico, where Liverpool progressed 7-6 on aggregate.

The Italian hosts were aggrieved post-match, sporting director Monchi leading calls for the introduction of VAR after Roma were denied two penalties – Edin Dzeko wrongly flagged for offside before he was taken down by Liverpool goalkeeper Loris Karius, while Trent Alexander-Arnold handled the ball just past the hour-mark.

Pallotta did not hide his feelings afterwards, telling reporters: "It's absolutely clear that VAR is needed in the Champions League, because you can't let stuff like this go.

"You can all look at it yourself. Dzeko wasn't offside, got taken down for a penalty. At the 65th minute, there was a handball that was obvious to everybody in the world except those on the pitch. In the 67th minute [Patrik] Schick gets taken down in the box, I mean it's just…

"I know it's difficult to ref, but it's really embarrassing when we lose on aggregate like that… By the way, it should've been a red card, so would've been 10 men from the 63rd minute.

"Again, congratulations to Liverpool, they're a great team, but if we don't get VAR in the Champions League, stuff like this is an absolute joke."

Roma star Alessandro Florenzi was also angered by what transpired in the Italian capital, feeling his team may have joined Madrid in the Kiev showpiece if VAR was present.

"The bitterness remains, especially for that penalty and what would've been a red card. We could've gone 3-2 up and attempt the miracle that we only grazed," Florenzi told Mediaset Premium.

"It does make you angry to go out like that. We conceded seven goals over two legs, but without the first Mohamed Salah goal being offside, then the penalty on Edin Dzeko who wasn't offside and the really obvious one with the handball…"

"If there was VAR technology in the Champions League, I don't know if the final would've been Real Madrid-Liverpool. VAR takes away a lot of doubts and it can happen that a referee doesn't see it in a split second, but in 10 seconds you can watch the footage and be sure," Florenzi continued.

"Roma could've achieved something extraordinary, which all of Rome was dreaming of. I think all of Italy is proud of us tonight. It has to be a starting point for us and not a finish line, as we must want to live these nights again."