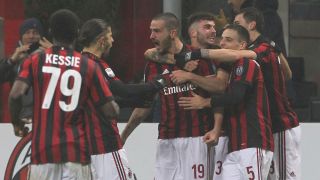 Leonardo Bonucci scored his first AC Milan goal to secure a scrappy 1-0 win over Crotone in Serie A on Saturday.

Milan were dominant throughout the contest at San Siro, but could only score a solitary goal - a decidedly fortunate one at that as Bonucci benefitted from Crotone goalkeeper Alex Cordaz unwittingly punching the ball into him.

Cordaz had earlier kept Crotone in the contest, making a string of impressive first-half saves, only to undo all his good work nine minutes after the interval.

Franck Kessie had a goal ruled out after referee Fabio Maresca consulted the video replay, denying Milan a more comfortable margin of victory.

Three points keep Milan among a clutch of clubs hanging onto the coattails of sixth-place Sampdoria in the race for European football, but Gennaro Gattuso's side once again looked much less than the sum of their expensively assembled parts.

Milan were held 2-2 by rock-bottom Benevento and were hammered 3-0 by 19th-placed Hellas Verona last month, which perhaps explained their cautious start against the team starting the day in 18th.

Hakan Calhanoglu forced Cordaz into a first real test in the 25th minute, bursting clear and shooting left-footed from a narrow angle.

Milan dominated possession and had the better of the chances, Kessie fizzing over the crossbar and Giacomo Bonaventura scuffing wide before the hosts somehow failed to score in a flurry of chances five minutes before the break.

Bonaventura headed wastefully wide, before Cordaz kept out Lucas Biglia's 25-yarder and made an even better save to tip Suso's cross-shot onto the post, with Calhanoglu's attempt at a diving header and Alessio Romagnoli not putting off the veteran.

Rushing to punch Bonaventura's corner away, Cordaz only succeeded in diverting the ball into Bonucci and into his own net - the Rossoneri captain opening his Milan account in a baffling manner that perhaps sums up his time at San Siro thus far.

The skipper's intervention from an offside position saw Kessie's celebrations cut shot by VAR soon after - the Ivorian going unrewarded for a fine clipped finish beyond Cordaz.

Marcello Trotta brought a first save from Gianluigi Donnarumma shortly after the hour mark, with Romagnoli stepping in front of Ante Budimir to deny him a tap-in, but Milan rode out the scare and ought to have scored again.

Suso saw a brilliant effort drift just wide and Bonaventura brought another flying save out of Cordaz as the hosts tried their best to gain a measure of comfort.

Bonucci was adjudged to have fouled his man before heading home in stoppage time, before Bonaventura's long-range effort, with Cordaz off his line, landed on the roof of the net and the nature of this victory is unlikely to do much to soothe the disillusionment surrounding the Rossoneri.