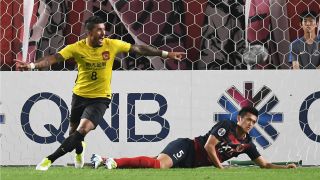 Paulinho's away goal was enough to send Guangzhou Evergrande into the quarter-finals of the AFC Champions League after a 2-2 aggregate draw with Kashima Antlers on Tuesday, while Persepolis, Al Hilal and Kawasaki Frontale also went through.

The Brazilian midfielder had hit the only goal in the first leg and, after Pedro Junior bent in a brilliant 20-yard opener for the Japanese champions in the second leg, Paulinho scored again, tapping in after a long throw-in caused chaos in the box.

That left the Antlers needing to score twice and although Mu Kanazaki poked home off the underside of the crossbar in the first minute of added-time, his side could not score again to qualify, with 2015 winners Guangzhou moving into the last eight.

Kawasaki Frontale booked their place in the quarter-finals for the first time since 2009 by brushing aside Muangthong United 7-2 on aggregate, a 4-1 victory on Tuesday adding to their comfortable first-leg lead.

Yu Kobayashi, Tatsuya Hasegawa and Eduardo Neto all struck in a nine-minute period before half-time to assert the hosts' control, with Rhayner adding their fourth after the interval.

Iran's Persepolis edged through to the quarter-finals of the AFC Champions League for the first time in the club's history after triumphing 1-0 on aggregate against Lekhwiya of the Qatar Stars League.

An own goal by Chico Flores after 23 minutes of the second leg proved to be the difference between the sides at Jassim Bin Hammad Stadium, the former Swansea City defender turning a cross into his own net.

Congratulations to for qualifying for the quarter-finals! May 30, 2017

In Tuesday's remaining last-16 tie, Al Hilal progressed 4-2 on aggregate against Esteghlal after winning both legs 2-1, Salem Al Dawsari smashing home the winner from a tight angle to settle the match with eight minutes to go.