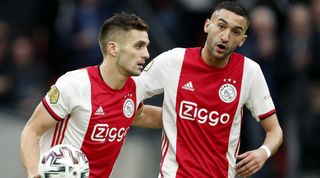 Tadic was part of Ajax's sensational side that took Europe by storm last season.

The former Southampton attacker is experienced the best season of his career last term and attracted interest from La Liga champions Barcelona.

However, Tadic has claimed that a move to one of Europe's most successful football clubs doesn't interest him.

"I was not surprised that FC Barcelona wanted to hire me for six months because I believe in myself and I have had an excellent season," he told De Telegraaf.

"But I have said a hundred times that Ajax is my club and there was no reason to leave for Barcelona ​​because I have everything I want here. And I am under contract until 2026."

Tadic's teammate Hakim Ziyech is the latest to leave Amsterdam - with a pre-contract agreement signed with Chelsea that will see him move in June.

The Serbian believes his Moroccan colleague will cope with the pressure od the Premier League and be a hit in west London.

"I know from my own experience that the Premier League is a tough competition," he added.

"But I hope and count on Hakim to succeed because he is a quality player. And Chelsea seems to me a club where it fits well, because it is an attacking team.

"Hakim comes into its own in this. I hope we can all give him a nice farewell: with three prizes."

Tadic alludes to yet another attempt at a treble with Ajax, but this time the Europa League seems more attainable than the Champions League did last season.