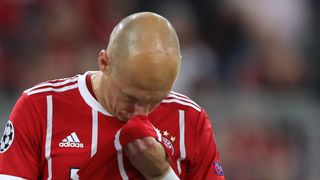 Arjen Robben trained alone on Sunday as the Bayern Munich winger battles to be fit to face Real Madrid in the second leg of the Champions League semi-final.

Robben limped out of the first leg after eight minutes and was not in Bayern's much-changed squad for Saturday's Bundesliga win over Eintracht Frankfurt.

David Alaba and Javi Martinez played a full part in Sunday's training session and could be ready to start at the Santiago Bernabeu on Tuesday, although Jerome Boateng has been ruled out.

"The mood within the team is very, very good," Alaba said. "You can see in training how focused and concentrated we are.

"In the dressing room you can tell how much we want it. We'll throw everything we have at it.

"I'll obviously keep doing all I can to stay on track [to play]."

Preparations are in full swing at Säbener Street! April 29, 2018

Left-back Alaba's return will be welcomed by Bayern after his replacement Rafinha was badly exposed in Madrid's 2-1 victory, the Brazilian's loose pass setting up a break for Marco Asensio to hit the winner.

Madrid have injury problems of their own, with defenders Nacho and Dani Carvajal both doubts, meaning Lucas Vazquez may need to fill in at right-back, as he did in the closing stages in Munich.

Isco - who trained on Sunday - is also battling to recover after sustaining a shoulder injury in the first leg, which forced his half-time withdrawal for matchwinner Asensio.

Our preparations for Tuesday's visit of are underway!April 29, 2018