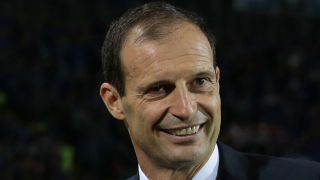 Massimiliano Allegri said matches will last "three or four hours" if officials do not change the way they are utilising video assistant referees following the technology's role in two key decisions as Juventus drew 2-2 against Atalanta.

Allegri's side were 2-1 up when Mario Mandzukic had a goal ruled out after referee Antonio Damato watched video replays of an elbow to the face of Alejandro Gomez by Stephan Lichtsteiner that earned the Swiss defender a yellow card.

Towards the end of the game, Damato again referred to video replays before awarding Juventus a penalty – subsequently missed by Paulo Dybala – for an alleged handball by Andrea Petagna, despite the ball appearing to strike the player's shoulder.

Allegri bemoaned the use of the technology, telling reporters: "If we want football to be a sport that is no longer a sport, then use VAR on every incident. However, if we get to March where every point becomes decisive, then games can last three or four hours.

"In my view, technology should only be used on objective situations – offside, in or out of the box, over the line or not – but when it comes to subjective situations, people are never going to agree. That's sport."

The result ended Juventus' six-game winning streak in Serie A and left them two points behind leaders Napoli going into the international break.

After seeing goals by Federico Bernardeschi and Gonzalo Higuain cancelled out by strikes from Mattia Caldara and Bryan Cristante, Allegri admitted he was relieved to come away with a point.

"It was a good performance in terms of technical passing and intensity, it seemed comfortable, then we conceded that goal on a free-kick to shake things up," he said.

"In the end, it actually went well for us, because we got irritable and risked losing it on the counter."

Opposite number Gian Piero Gasperini felt Lichtsteiner was fortunate to stay on the pitch after his foul on Gomez and disagreed with the penalty decision against Petagna.

He said: "The referee gave a yellow card to Lichtsteiner, but if he had given red there would've been no scandal.

"If Petagna got it with his arm, it is undoubtedly a penalty. The sensation I got was that he lifted his arm, but struck the ball with his shoulder. The movement of the arm certainly made it look worse than it really was.

"The referee gave a penalty straight away, the VAR officials called to advise him to look again and he remained firm on his idea. At that point, you just have to accept decisions.

"It's an odd situation, some might say it was handball, some might not, there's never going to be one final agreement between everyone. VAR has fixed a lot of situations, but it won't fix everything."

He added: "In any case, I am so happy to have seen my lads play with such enthusiasm, to score two goals when 2-0 down, and with all the passion from the fans in the stadium."