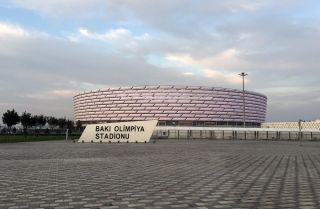 Amnesty International has increased the pressure on European football’s governing body UEFA by saying Azerbaijan must not be allowed to “sportswash its appalling human rights record” by staging high-profile football matches.

Baku’s Olympic Stadium is hosting the Europa League final between Arsenal and Chelsea next Wednesday and is also the venue for four games in next year’s European Championship.

But the decision to stage the Europa League showpiece in the ex-Soviet republic has been strongly criticised by fans and human rights groups and, on Tuesday, Arsenal midfielder Henrikh Mkhitaryan said he will not travel to the game amid fears for his safety in a country that is locked in a simmering conflict with his native Armenia over the disputed Nagorno-Karabakh region.

In a statement, Amnesty International UK director Kate Allen said: “Fans will be glued to their TVs during this game but we must ensure that Azerbaijan isn’t allowed to ‘sportswash’ its appalling human rights record as a result of the football fanfare.

“Azerbaijan is in the grip of a sinister human rights crackdown, with journalists, bloggers and human rights defenders being ruthlessly targeted. Unfair trials and smear campaigns remain commonplace.

“LGBTI people have been arrested, and even people fleeing the country have been harassed and pressured to return.

“Fans, players and backroom staff can help prevent Azerbaijan’s likely attempt to sportswash its image by informing themselves about the human rights situation behind the glitzy facade of Wednesday’s match.

[…] It‘s the kind of game that doesn’t come along very often for us players and I must admit, it hurts me a lot to miss it.I will be cheering my teammates on! Let’s bring it home @Arsenal 🏆💪🏼💪🏼💪🏼 #uel#final#arsenal#chelsea#AFC#COYGpic.twitter.com/gnDA6oyolw— Henrikh Mkhitaryan (@HenrikhMkh) May 21, 2019

“All too often, governments are using high-profile sporting competitions to distract attention from repressive policies and human rights violations, to instead project an image of openness. This couldn’t be further from the truth with the current administration, and the Arsenal-Chelsea clash is just the latest reminder of this.”

According to Azerbaijani human rights defenders, more than 150 people are in prison in the country on politically motivated charges, while mass arrests are used to silence the media and crack down on non-governmental organisations.

The country, which has been run by president Ilham Aliyev since 2003, is currently ranked 166th on Reporters Without Borders’ World Press Freedom Index, the lowest ranking in Europe.

So far, however, most of the criticism of UEFA’s choice of Baku for the final has focused on how difficult and expensive it is for Arsenal and Chelsea fans to get there, as well as the large proportion of tickets that have been allocated to local fans and sponsors.

UEFA has pointed out it has an obligation to grow the game throughout the continent and there was no way of knowing that two London-based sides would reach the final when the decision was made in 2017. It has also said the ticket allocation was based on how many travelling fans it believed Baku’s airport could handle.

For its part, the Azerbaijan Football Association has said it regrets Mkhitaryan’s “unwarranted” decision to stay away and reiterated its commitment to UEFA that all visitors for the game will be welcome.

Mkhitaryan, who captains Armenia, has skipped club games in Azerbaijan before, but it is perhaps worth noting that the Armenian team was welcomed in Baku when it hosted the multi-sport European Games in 2015.