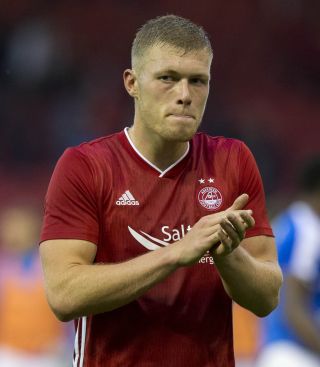 McInnes was given the nightmare news earlier this week that last season’s top-scorer Cosgrove faces up to two-and-a-half months out of action after tearing knee cartilage during last Saturday’s pre-season clash with Hibernian.

Now to make matters worse, Cosgrove’s understudy Main has also been ruled out of Saturday’s Scottish Premiership curtain raiser against Rangers with a thigh strain.

The double injury setback means McInnes will now have to ask youngster Bruce Anderson to lead the line against Steven Gerrard’s side – but insists he has full faith in the 21-year-old.

He said: “Sam’s injury is not helped by the fact that Curtis Main is out for Saturday as well. He’s got a thigh strain so Curtis and Sam are both out. Apart from that everything else is brilliant.

“Bruce has been doing great anyway through pre-season so I’ve no qualms about throwing him in. We have a young boy who has been champing at the bit. He’s a regular goalscorer and we are fortunate to have him available.

“We’re clearly short on numbers at centre forward, so I walked wee Bruce off the training pitch today just to make sure he was fit. He’ll be ready to go on Saturday.”

McInnes will be denied his services in any case until early October at best, but he admits he is “delighted” the striker is not looking at a longer lay-off.

“It seems a bit silly saying you’re delighted at losing your top scorer for two to three months but it could have been an awful lot worse,” he said.

“It’s only going to be eight to 10 weeks – which is still long enough, especially on the eve of the new season.

“He doesn’t need surgery as it stands but he is non-weight bearing for two weeks, so he’ll be on crutches while that cartilage heals.

“We’ll probably re-image it again in a few weeks’ time and hopefully the healing process is going. But ultimately we’re going to be without our top scorer for a period of time.”

McInnes is already looking for a replacement but with Aberdeen chairman Dave Cormack still battling to plug a £10million shortfall caused by the Covid-19 crisis, his options are limited – and former Scotland forward Steven Fletcher is not among his targets.

“We couldn’t afford Steven Fletcher,” admitted McInnes. “He’s a free agent but can still command a salary way above anything that anyone here gets.

“We are restricted financially as a club and are restricted in terms of options because in England half the country hasn’t kicked a ball since March and a lot of the Championship and Premier League clubs are in no rush to do deals for their younger ones.

“They’ve just knocked off and are getting ready for a break, so it’s tough to get someone in, but we will try to carry on with that.”