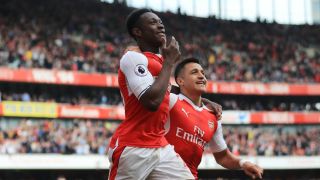 The Portuguese coach tempted fate by making eight changes from Thursday's Europa League win over Celta Vigo and it ultimately backfired, with the hosts consigning them to their first league defeat since losing 4-0 to Chelsea in October.

But the best chance of the half fell to Wayne Rooney, who pounced on a defensive error before being denied by Petr Cech.

Arsenal ultimately took charge in the second half, though, with Granit Xhaka's deflected strike breaking the deadlock, before Welbeck scored against his old club for the third time to effectively wrap things up before the hour mark.

United rarely looked like battling back as Arsenal saw things out in professional fashion and gave their slender Champions League hopes a boost, while Mourinho and his men turn their attentions back to the Europa League semi-finals after beating Celta 1-0 in Spain in the first leg.

The two sides produced a frenetic start and both went close inside the first eight minutes.

Arsenal were the first to be carved open, as Rooney fed Anthony Martial and the Frenchman saw his poked attempt turned around the post by Cech.

Alexis Sanchez then found Aaron Ramsey with an inch-perfect pass a few moments later, only for David De Gea to brilliantly palm his effort past the right-hand post.

Both chances fell to Welbeck, who first saw a six-yard effort crucially blocked by Phil Jones following a corner, before Chris Smalling produced a similarly important intervention to get in the way of the striker's first-time shot.

United should have made the breakthrough soon after, but Cech bailed out Rob Holding following a horribly misplaced backpass which was seized upon by Rooney.

Arsenal made the most of that let-off early in the second half and left United with a mountain to climb.

Xhaka broke the deadlock in fortuitous fashion in the 54th minute as his 30-yard drive took a wicked deflection off Ander Herrera and looped over the helpless De Gea.

And just three minutes later Welbeck put Arsenal two up, rising to meet Alex Oxlade-Chamberlain's right-wing cross with a fine header which found the net via the crossbar.

7 - Alex Oxlade-Chamberlain has seven Premier League assists this season - as many as in his five previous seasons combined. Creator.May 7, 2017

Mourinho attempted to claw United back into the contest by introducing Jesse Lingard and Marcus Rashford form the bench, but neither had a huge impact.

The visitors' final throw of the dice saw 20-year-old attacker Scott McTominay thrown on for his Premier League debut six minutes from time.

Proceedings had long since lost any real tempo, though, and Arsenal comfortably held on to move to within two points of United and six of Manchester City, while the Gunners still have a game in hand on both.