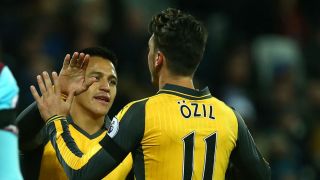 Arsenal must be willing to invest greater funds into the playing squad to avoid falling behind their Premier League rivals, says David Seaman.

A fifth-place finish in the top flight means Arsenal will miss out on Champions League football for the first time in 19 seasons, with manager Arsene Wenger's future still undefined despite his contract expiring next month.

There was further turmoil this week with reports Alisher Usmanov, owner of 30 per cent of Arsenal's shares, was seeking to purchase Stan Kroenke's 67 per cent majority stake for £1 billion, but the American's company KSE UK stressed on Monday that its shares were not for sale.

Regardless of what happens at Emirates Stadium during the close-season, Seaman – a three-time Premier League winner with Arsenal – wants to see a greater willingness to spend big to avoid being priced out of major signings by other elite clubs.

He told Omnisport: "All that concerns me, whatever happens, is I want there for there to be more money available for the manager.

"I think we are getting left behind a little bit by two or three clubs that are now ahead financially and they are spending money and things need to change at Arsenal.

"They need to look at their wage structure – how can you attract the top players when you're not paying the top money? It is as simple as that.

"They have got to be real with what's being paid to players. If you have a top player who wants to come to London and at Arsenal he is being offered say 100 grand and at another club it's 200 grand, where is he going to go?

"For me, it's as simple as that – we are not attracting big players anymore."

Arsenal can still end the season with silverware as they take on Premier League champions Chelsea in the FA Cup final on Saturday and Seaman thinks Alexis Sanchez and Mesut Ozil will be key to their aspirations.

He said: "The strike force and taking their chances [will be key for Arsenal] because in Sanchez  you've got a guy who can score from anywhere.

"Chelsea will have chances because they are quality and have shown that all season. I just hope that have an off day."

Wenger has confirmed his future will be clarified after a board meeting following the match at Wembley, and Seaman hopes he remains despite growing calls for him to leave.

"I would like him to stay because I have a lot of admiration for the guy, he is a nice guy and when he first came to the club he was brilliant," he said.

"I would like him to stay to try to develop something to challenge for the Premier League, but at the moment we are quite a way away."