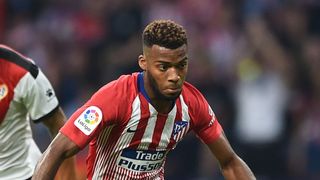 Spurs are lining up a loan move with a view to a €60m purchase option in the summer, according to the Independent.

Lemar could offer Jose Mourinho more offensive options for the latter half of the season as the club chase Champions League football.

Arsenal are also monitoring the situation as they look to add some quality to the left flank of their attack.

Pierre-Emerick Aubameyang has been deployed on the left to accommodate Alexandre Lacazette, but it's not seen as an ideal situation.

Arsenal tried to sign Lemar in 2017, but a deadline day deal fell through.

Atletico Madrid have reportedly told prospective clubs that there will be a €6m loan fee for the 24-year-old.

The Frenchman is keen to move this month after falling out of favour with Atletico boss Diego Simeone.

Since his €62m move from Monaco, Lemar has scored just three goals for Atletico.

His poor form has been acknowledged by Simeone, who doesn't pull punches - even when it comes to his own players.

“If Lemar can stay or not... we know that agents work in an exemplary way,” Simeone said at a press conference.

“Clubs work in terms of the needs of the clubs. But, as a footballer, every time he has been available, he’s played a lot more than he hasn’t played.

“His characteristics have always excited me. But he hasn’t been able to live up to expectations.

“Let’s hope he has a good moment when he comes back from injury.”

Quiz! Can you name the line-ups from Arsenal vs Leeds in the Premier League, 2004?

Quiz! Can you name every player with 6+ Premier League goals in 2019?