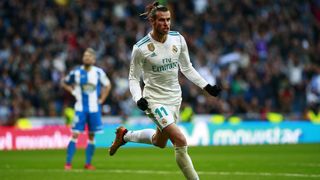 Real Madrid attacker Gareth Bale believes his team will eventually get back to their best.

Bale, Cristiano Ronaldo and Nacho Fernandez scored braces as Madrid showed some of their best form in a 7-1 thrashing of Deportivo La Coruna in LaLiga on Sunday.

Madrid have struggled so far this campaign, sitting fourth in the table and 19 points behind leaders and rivals Barcelona.

But Bale believes Madrid, who face Paris Saint-Germain in the Champions League last 16, will hit top form once more.

"Real Madrid have to rest up and take work as a team, taking it one step at a time," he said.

"I think we'll get back to our best slowly but surely. We have to keep working hard in the upcoming games and keep on winning.

"We never give in, even if we know LaLiga is now extremely difficult.

"When you're back playing alongside these team-mates, that makes you very happy. I'm glad to be back with them and scoring goals."

Bale is continuing his return to full fitness after multiple injury setbacks, taking his tally to six goals in nine league games.

The Wales international said he was not yet at full fitness, but he is desperate to star for Madrid in the latter part of the season.

"I'm happy to be back playing again, to be at this level and improving all the time.

"There are still big games to come and of course I want to play in and win these kinds of games."