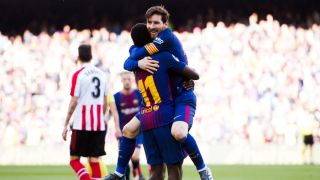 Lionel Messi scored for the sixth game in succession as Barcelona moved 11 points clear atop La Liga thanks to a routine 2-0 win over Athletic Club.

The leaders were missing the injured Sergio Busquets and the suspended Luis Suarez at Camp Nou but they had few issues in brushing aside Ernesto Valverde's former club to move further ahead of Atletico Madrid, who visit Villarreal later on Sunday.

Victory capped another impressive week for the Catalan giants, who dumped Chelsea out of the Champions League on Wednesday to set up a quarter-final against Roma, and this straightforward success moved them a step closer to regaining the domestic crown from fierce rivals Real Madrid.

Paco Alcacer, selected as Suarez's replacement, opened the scoring in the eighth minute - his first league strike since November - before Messi doubled the advantage with his 35th goal of the season in all competitions.

Barca utterly dominated the opening period and would have gone into the break with an even healthier lead had Philippe Coutinho and Paulinho not struck the woodwork on three occasions between them.

Just four days after an encounter with Chelsea that was more exacting than the 3-0 scoreline suggested, the intensity understandably dropped in the second half, but Valverde's men were able to keep Athletic at arm's length to ensure they head into the international break in buoyant mood.

Messi had scored 16 goals in 18 games against Athletic at Camp Nou coming into this clash and he almost improved on that tally as early as the fourth minute with a curling free-kick that Kepa Arrizabalaga tipped over the crossbar.

Barca did not have to wait long to break the deadlock, however, as Messi fed Jordi Alba down the left and the full-back cut the ball in towards the penalty spot where Alcacer sidefooted home into the bottom-right corner.

Kepa twice denied Messi in the 12th minute as Athletic found themselves swamped by the Blaugrana tide and the goalkeeper was beaten again soon afterwards, only for Coutinho's rasping half-volley from another Alba pass to crash off the bar.

The hosts continued to dominate and fine approach play involving Messi and Coutinho ended in Ousmane Dembele firing straight at Kepa from close range but there was no mistake from Messi on the half-hour as he received Dembele's pass and, left all alone on the edge of the area, rifled home.

Coutinho struck the frame of the goal for a second time, looping an effort onto the top of the bar after an impudent flick from Paulinho, who followed his compatriot in going close by curling a shot off the outside of the post as the interval approached.

Athletic did show signs of life in the early stages of the second period as Inigo Lekue and Sabin Merino erred from presentable opportunities, before an off-balance Coutinho could only stab an effort straight at Kepa.

The introductions of Inaki Williams and Aritz Aduriz off the bench offered Athletic another dimension up front but Marc-Andre ter Stegen was never truly tested as Barca cruised to a win that extends their unbeaten run in La Liga to 36 matches.